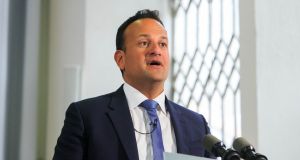 The Government will “nudge people and businesses to change behaviour” in a bid to tackle climate change, Taoiseach Leo Varadkar has said.

Launching the Government’s climate action plan in Dublin, Mr Varadkar said the strategy did not seek to find the moral high ground but to find a common ground on climate action, which gave a “platform which we can all work on”.

The plan envisages almost 1 million electric vehicles in Ireland within the next decade; bans on oil boilers in new homes from 2022, and for gas boilers by 2025; and the phasing out of coal- and peat-fired electricity generation, among other measures.

It will also begin an ambitious retrofit “easy pay scheme” that will see 500,000 homes retrofitted to B2 energy standard.

Mr Varadkar said the plan mapped out “a way forward that is both effective and sensible. One that achieves our targets, and in a way that is thought through and considered, supports employment and living standards and enables a just transition.

“Our approach will be to nudge people and businesses to change behaviour and adapt new technologies through incentives, disincentives, regulations and information.”

The plan, Giving Ireland a Sustainable Future, was launched at TU Dublin, Grangegorman at an event attended by 12 members of the Cabinet. The Taoiseach arrived at the venue on one of Dublin Bus’ new hybrid vehicles which are due in be service on the Lucan route this week.

Minister for Communications, Climate Action & Environment Richard Bruton said that the plan would involve “radical change in the way we do things”. He echoed the sentiments of Mr Varadkar that Ireland had been a “laggard” until now.

He said the plan had emphasised the next decade until 2030 as the period in which change could be brought about which was “most economic and would create the least burden on our people”.

He also said the most vulnerable must not be left behind during the transition to sustainability. “We have to be fair to those who are most exposed to change,” Mr Bruton said.

The plan sticks to its previous timeline for closing down the Moneypoint power-generating station (fuelled by coal), which remains at 2025, and the phasing out of peat-fuelled stations (2028).

In terms of agriculture, much of the emphasis is on changes in farming practice, land-use management, biodiversity, and new technology. There is also an ambitious plan for afforestation which will increase the capacity of Ireland to for carbon capture, and to have carbon sinks.

The plan proposes an additional 8,000 hectares of new forestry every year for the next five years, establishing 40,000 hectares in total. That will be reflected in changes in CAP and also in land use. Implicit in it, but not stated, will be an unspecified fall in the national herd, particularly in the beef sector.

Minister for Agriculture Michael Creed said the contents of the report would be challenging.

“We export our product to 180 countries,” he said. “We are aware of our obligations under Paris but we are equally aware that the international market place is unforgiving on a food industry that does not meet its obligations (for sustainability).”

Minister for Transport Shane Ross said there would be 1 million electric vehicles in Ireland by 2030, a big modal shift to buses, and hundreds of thousands more people cycling, walking and using other forms of transport.

“There is a a revolution in transport coming,” he said.

Among the other measures included in the plan are a prospective ban on single-use plastic, and moves to deter fossil fuel cars from cities including a review on whether congestion charges should be introduced in Dublin, Cork, Limerick and Galway and a a review of parking policy.

There is a huge emphasis on offshore wind in the plan, although officials accept that there are obstacles at present in terms of technology and legislation. For example, it would be difficult to connect such power to the national grid at present.

However, the Government has said that offshore power from Ireland is of “continental scale” and there is potential to sell it on to other countries through inter-connectors.

Ireland was currently 85 per cent dependent on fossil fuels and its greenhouse gas emissions were “rapidly rising”, a statement from Mr Bruton’s department read.

“We have a short window of opportunity to reverse this trend and secure a better, healthier, more resilient future for the country. This means changing the way we heat our homes, the way we travel and the way we power our country.

Among the other key actions identified in the plan are:

The plan also includes actions “to ensure that all of us as citizens become engaged and mobilised to take climate action, while ensuring that the necessary societal and economic transition that we have to make is fair, both in Ireland and globally”.

Mr Varadkar said: “This plan represents the sum of our hopes for the future. Our call to action in the fight to save our planet.”

Responding to questions, Mr Varadkar said: “A lot of our policies is going to be about nudging people and business to make the right decision and make it simper and cheaper to do the right thing.

“Often when I hear the whole debate around climate action, it it bothers me it is framed on certain targets and if we don’t meet them we have to pay fines.

“The whole point is to take the decision because they are the right thing to do. We will have warmer homes, cleaner air, shorter commutes.”

He added the controversial broadband plan would help reduce carbon emissions. “If you want people in rural Ireland to reduce their commutes and work from home then you need that investment that works in favour of climate change.”