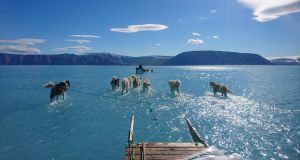 Sled dogs wading through standing water on the sea ice during an expedition in Northwestern Greenland, in this June 13th photograph taken by Steffen Olsen of the Centre for Ocean and Ice at the Danish Meteoroligical Institute. Photograph: Steffen Olsen/AFP/Getty Images

A photograph, taken by Steffen Olsen from the Centre for Ocean and Ice at the Danish Meteorological Institute on June 13th, showed sled dogs wading through water ankle-deep on top of a melting ice sheet in the country’s northwest.

The photo, taken in the Inglefield Bredning fjord, depicted water on top of what Mr Olsen said was an ice sheet 1.2 metres thick.

His colleague at the institute, Rasmus Tonboe, tweeted that the “rapid melt and sea ice with low permeability and few cracks leaves the melt water on top”.

Mr Olsen tweeted that his team relied on traditional knowledge from local hunters and their dogs as they searched for dry spots on the ice. The team also used satellite images to plan their trip. He said the photos documented an “unusual day” and that the image was “more symbolic than scientific to many”.

Ruth Mottram, climate scientist at the Danish Meteorological Institute, told the Guardian: “This year the expedition to retrieve the instruments – by dog-sled, still the most practical way to get around in this region at this time of year – ran into a lot of standing water on the sea ice. The ice here forms pretty reliably every winter and is very thick, which means that there are relatively few fractures for meltwater to drain through. Last week saw the onset of very warm conditions in Greenland and in fact much of the rest of the Arctic, driven by warmer air moving up from the south.”

She said these conditions had let to “a lot of melting ice, on the glaciers and ice sheet, and on the still-existing sea ice”. The DMI weather station nearby at Qaanaaq airport registered a high of 17.3C last Wednesday and 15C last Thursday, which is high for northern Greenland, even in summer. Mottram cautioned that the numbers were provisional and would be subject to checking.

In other areas, meltwater drains away through fractures in the ice to the rocks far below, and so does not leave standing water on the surface. But because the ice in the region is thick and fracture-free, the water pools above the ice, giving rise to the dramatic photograph.

Melting events such as the one pictured would normally not happen until later in the summer, in late June or July. Mottram said it was too soon to say what role global warming had played, because although these temperatures were unusual, the conditions were not unprecedented and “still a weather-driven extreme event, so it’s hard to pin it down to climate change alone”.

In general, however, she said: “Our climate model simulations expect there to be a general decline in the length of the sea ice season around Greenland, [but] how fast and how much is very much dependent on how much global temperature rises.”

She said forecasts indicated that the warm conditions over Greenland would persist at least for another few days, so the dog-sled teams will face further tough going.

The photograph emerged amid concerning temperature data from Greenland. On Saturday, the Washington Post’s Capital Weather Gang said weather models showed that temperatures over parts of Greenland peaked at 4.4C (40F) above normal last Wednesday, the day before the photo was taken.

Above-average temperatures over nearly all of the Arctic ocean and Greenland during May have led to an early ice retreat, with the second-lowest extent of ice in the 40-year satellite record being registered, according to the US National Snow and Ice Data Centre.

Air temperatures at the end of May along the western Greenland coast were as much as 7C above the 1981–2010 reference average for the month, the centre said. It also recorded Arctic ocean temperatures of 2-4C above the average.

“The melting is big and early,” Jason Box, an ice climatologist at the Geological Survey of Denmark and Greenland, told the Washington Post.

At a local level, the sea ice melt provides significant problems for communities in Greenland, who rely on it for transport, hunting and fishing.

“Extreme events, here flooding of the ice by abrupt onset of surface melt, call for an increased predictive capacity in the Arctic,” said Olsen. – Guardian