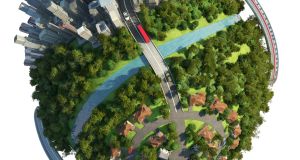 Political insiders wonder if the electorate’s concern for climate change extends to changing their own habits or accepting new costs.

“We’ve got the message” was Taoiseach Leo Varadkar’s response to the recent upsurge in support for the Green party at the local and European elections.

He understood the public’s concerns about climate change, and its desire for the Government to do more, he said.

And they would do more, he pledged.

Behind the scenes, though, political insiders of all stripes wondered if the electorate’s new-found concern for climate change would extend to changing their own habits, or accepting new costs, especially in the shape of carbon tax increases.

Fine Gael fervently believes it suffered at the polls for implementing difficult but necessary policies after the financial crash, and it is extremely cautious about repeating the dose.

“You have to work with people,” party insiders say. Which actually means: don’t upset them.

So a key message from the Taoiseach on Monday was people would not be forced into changing their lifestyles – instead they would be “nudged” to do so.

This was not a radical production by a Government itching for change, with political capital to spend on its agenda. Caution is the watchword. “Our approach,” he said, “is not coercive.”

The changes,” said Minister for Climate Action Richard Bruton, “will be sensible and fair . . . We have chosen the changes that impose the least burden on our people.”

In fairness, the Taoiseach did acknowledge there would be costs to be borne by people with high-carbon lifestyles – those who drive a lot, those with large houses to heat, and so on. He knows that plan a which penalises nobody is a plan which will achieve nothing.

This is the difficulty in translating policy to politics. One has to upset some people.

This is a central challenge for all governments.

Contrary to widespread public prejudice, not all politicians are cynics; in fact, ungrounded optimism is a more common failing.

And there was certainly plenty of optimism amid all the usual hokum (the schoolchildren present were gratifyingly frank about the attraction of dodging class, and freely admitted too that the questions were written for them).

For a start, Ministers seem to genuinely believe the grand commitments that were announced would reduce carbon emissions. But they won’t: only the hard-worked, nitty-gritty of policy action, backed by carrot but also by stick, will reduce emissions.

Take, for example, the promise that one million of the two million cars, vans, buses and lorries on Irish roads will be electric by 2030.

Last year, there were 1,233 electric vehicles registered out of a total of over 125,000 new vehicles. If the Government wishes to move that dial significantly, it will have to do some things that will be unpopular with some people, and do them quickly.

All that, however, seems to be still up for negotiation.

Political caution is understandable, of course. But sometimes politics and politicians lag behind the changing tides of public opinion.

That happened on same-sex marriage and on abortion; climate change shares some characteristics as a political issue, though it differs in that it may end up costing voters money, a subject on which many of them have inflexible views.

Either way, climate change will remain one of the great issues of the age, and the next government will be forced to do more, not less, on climate action.

This plan is likely to be the first word, not the last.