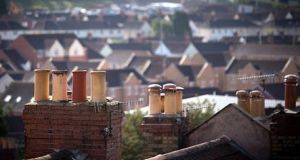 The manager of Fast EcoBuild, Kieran Carew, says those who retrofit their homes to an A standard should be property tax exempt for a set period of time – those who don’t should pay more

Fast EcoBuild is one of many companies specialising in deep retrofit – the process of reinstating the fabric of a building and making it eco-efficient.

“We see it as an area that will keep the construction sector busy for the next 20 or 30 years,” Mr Carew says.

He believes that is good news for an industry that has come through a major slump, although the availability of skilled workers, financing and rental properties – where people might live during renovation works – are potential stumbling blocks.

Last year Fast EcoBuild, which employs six people and supplies and trains up to 200 contractors around the country, completed just six properties, but this year alone they expect that to grow to about 50.

A typical deep retrofit on a three-bed semi-detached house will cost about €70,000 to €80,000 – a grant will cover half of that cost – and includes insulation, new doors and windows, a heat-pump system, solar PV technology and air tightening.

Mr Carew believes that when Ireland follows the lead of other countries and enables a financial reward for those homes that put excess energy back into the electricity grid such investments will begin to pay back in about 10 years.

There is also the savings made on fossil fuels which face a likely carbon tax increase and home values will increase – all incentives to keep his industry active.

He says those who retrofit their homes to an A standard should be property tax exempt for a set period of time – and those who don’t should pay more.

“We all grew up with fossil fuels so let’s have the next generation grow up with heat pumps. We are creatures of habit.”