As of Tuesday, Ireland is among 19 countries now backing the long-term target 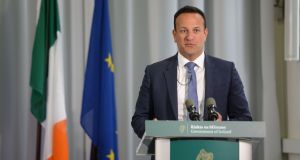 Ireland is to join a majority of other EU members in supporting a carbon neutrality objective for 2050, increasing the chances that a deal will be struck at an EU summit later this week.

EU leaders could give their blessing to a proposed long-term climate strategy during a European Council summit in Brussels on Thursday and Friday, which will be attended by the Taoiseach Leo Varadkar.

The UK earlier this month committed to achieving “net-zero” emissions by 2050, and the move was subsequently backed by France and the Netherlands. As of Tuesday, Ireland is among 19 countries now backing the long-term target, which would rank as one of the most ambitious climate action targets among the world’s major economies.

The climate action plan published by the Government on Monday “would ensure Ireland will reach our 2030 targets and will put us on the right trajectory to meet net zero emissions by 2050”, said a spokeswoman for the Department of Communications, Climate Action and Environment.

“The Government also yesterday [Monday] agreed to support the ambition emerging within the European Union to achieve a net zero target by 2050 and the plan commits to evaluate in detail the changes required to adopt such a goal in Ireland,” she confirmed.

It is likely that in evaluating the changes required in a highly ambitious programme of decarbonisation over three decade the cost implications will then be spelt out. British prime minister Theresa May’s initiative to decarbonise the UK economy by 2050 has been estimated to cost £50 billion per year.

In spite of progress on the net-zero target, the European Commission warned EU countries on Tuesday that draft national plans for the coming decade are insufficient to achieve the bloc’s 2030 energy and climate targets. “Substantial” gaps have been identified on renewables and energy efficiency.

Implementing the EU’s new energy and climate laws up to 2030 means taking stock of how member states intend to help meet the bloc’s joint commitments, now that country-specific targets have been ditched. Each member state had to submit to Brussels a draft national energy and climate plan by last December with a final version due by the end of the year.

The assessment warns member states will come up 2 per cent short in sectors like agriculture, ground transport and buildings, which are not covered by the EU’s carbon trading system. The current trajectory is heading for 28 per cent cuts rather than the agreed 30 per cent.

It criticises the Irish National Energy and Climate Plan (NECP) for an “emissions gap”, which meant it would fall short on commitments in transport, building and agriculture policies. Commitments on renewable energy did not indicate “level of ambition”, while targets on achieving energy efficiency were insufficient.

The expected withdrawal of the UK from the EU was a “key risk” that could undermine energy security as Ireland is heavily dependent on fossil fuel imports, it warns. “Additional measure could be needed to maintain security of supply and should be further specified in the final plan.”

The Commission confirmed the assessment does not take account of the more ambitious commitments announced on Monday which they expect to be included in their “final” end of year plan.

The NECPs were insufficient to meet current transport targets for 2030, said Carlos Calvo Ambel, trends and analysis director the NGO Transport & Environment. “The climate plans submitted by governments are completely inadequate and the Commission isn’t doing anyone a favour by glossing over that fact.”

The EU itself needed to do a lot more to clean up transport, “in particular by making electromobility a top industrial priority and by greening of investment and taxation”.