Department of Agriculture suspended licence for felling at Leitrim forest 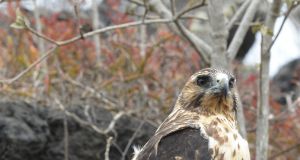 The man who located the sparrowhawk’s nest in the Leitrim forest said he had been a bird watcher for 50 years. File photograph: Rodrigo Buendia/AFP/Getty Images

The discovery of a sparrowhawk’s nest has led to the suspension of a tree felling operation at a 19 hectare Co Leitrim forestry plantation.

Coillte has confirmed that a felling licence for forestry at Meenymore, Glenboy near Manorhamilton was suspended in recent days by the Forest Service of the Department of Agriculture Food and the Marine, following the detection of a nesting sparrowhawk.

“The sparrowhawk’s conservation status in Ireland is green being our most common raptor and occurring in every county in Ireland”, it added.

Brian O’Hagan, a local farmer who had already used a digger to stop Coillte getting access to the plantation, said it took a group of concerned locals just one and a half hours to locate the nest and evidence of other wildlife such as badgers and red squirrels.

“Coillte were supposed to do a wildlife study before going in there. They told us they had all done but they did not produce the paperwork,” said Mr O’Hagan.

Coille said while a number of environmental assessments were conducted ahead of licensing, “the output is not a printed report, but rather a rating for the site” which is verified by their environmental officers.

The plantation in question is over 40 years old. Locals say it was thinned several years ago and as a result light gets in allowing habitats to survive.

Mr O’Hagan (46) said he had a number of concerns about the clear felling operation, a forestry practice in which most or all trees in an area are uniformly cut down.

He said the forestry was on a steep slope and as someone involved in a local water schemes, he was worried about the residue accessing the Scardan river which flows into the river Bonet, a tributary of Lough Gill.

Lyn Brookes from Extinction Rebellion Leitrim who visited the site with local farmers and other campaigners, said Lough Gill is the water source for over 30,000 people from Sligo and Leitrim. “This is a very steep mountain with streams and tributaries feeding into the Scardan river below,” she said. “Sludge and waste products from the clear felling would move downhill and end up in the river. As far as we can tell, there does not seem to be any plans in place to mitigate the damage that the run off is going to cause”.

She said that what happened at Meenymore was an example of “people power” in action. “A standoff between one man and the forestry led to other people becoming involved,” she said.

The Leitrim resident said the nest was located after just one small section of the 19 hectare plantation was examined. Ms Brookes said that people in Leitrim were getting fed up with “forestry being foisted onto them, without any consultation or right to appeal”.

“In winter, some people have no light to their homes at all. They have been surrounded by all year round green walls - there is no respite like you would get with broad leaf trees”.

Mr O’Hagan said the discovery of the sparrowhawk’s nest was the turning point in this dispute but he hoped there could now be dialogue with Coillte on what will happen after the chicks leave the nest.

“There has been a lot of clear felling done around Leitrim and the landscape has been left like Beirut after a bomb blast,” he said. “This forest is on the Leitrim Way and we get a lot of walkers and cyclists. It won’t be too attractive if they do the clear felling”.

The man who located the bird’s nest said he had been a bird watcher for 50 years and found it after spotting several “plucking posts”, locations where birds of prey like sparrowhawks pluck small birds before bringing the remains to the nest.

He said he had also found a wren’s nest and a buzzard’s nest from last year. “It is illegal to take a photograph of a nest without a licence ,” he explained. “Yet forestry companies can go in with chainsaws and cut down trees at this time of year when birds are nesting. It seems like madness to me”.

In a statement Coillte said felling was planned carefully and licensed by the Department “to ensure there is no impact from the forest operation to receiving waters”. Monitoring was routinely carried out to ensure no impact to water quality, it added.

It did not answer a question in relation to why locals found the sparrowhawk’s nest so rapidly when it did not.

Coillte said that more than 20 per cent of its lands (over 90,000 hectares) were managed primarily to protect wildlife and sensitive habitats and promote biodiversity and it cited examples in Leitrim such as Largy and Benbo forests, Lough Rynn and the Sliabh an Iarainn and Boleybrack upland mountain habitats.

“The trees that will be replanted at Glenboy are being planted for commercial purposes to support local jobs while also sequestering large amounts of carbon dioxide from the atmosphere” added Coillte. “In other areas where nature conservation and biodiversity management is the primary objective Coillte plant native broadleaf tree species”.