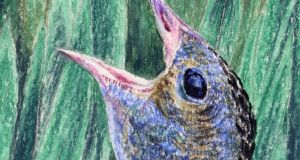 Corncrake: important place in literature has romanticised the bird

At the Moscow Arts Theatre in 1903, director Constantin Stanislavski was preparing the premiere of Anton Chekhov’s The Cherry Orchard. Offstage sounds were essential to Stanislavski’s theatrical style and for Act II, set in a graveyard, he planned a lot of them.

Gusts of wind, rustling leaves and snapping twigs were all to be heard, plus, for mournful repetition, a corncrake and frogs. Chekhov took particular objection to these. “Haymaking usually takes place between June 20th and 25th,” he said, “at which time I think the corncrake no longer cries and frogs also are silent.”

There are still, as always, plenty of corncrakes in Russia. In 2015, BirdLife International estimated between one million and 1.5 million pairs in European Russia alone, pushing the species’ global total up to some six million pairs. The corncrake’s migrations embrace 84 countries, from Albania to Zimbabwe.

By the Red List criteria of international conservation, the bird is thus of “least concern”. Yet in Ireland this month, the Department of Arts, Heritage and the Gaeltacht will begin spending some €5.9 million on a five-year conservation project at the corncrake’s last Irish strongholds on the coasts and islands of Donegal and Connacht.

Declines have been reversed by conservation in some states, notably the UK

More than €4 million of this is an award from the EU’s LIFE Programme, part of the €3.4 billion LIFE has spent on various conservation proposals since 2014.

Ireland’s case for the corncrake is straightforward. In Annex 1 of the EU Birds Directive, Crex crex “though widespread in the EU is declining” and in need of conservation. Ireland reported to LIFE that its corncrake population had dropped by 85 per cent since 1978 and that the bird’s range had reduced by 92 per cent. The male’s rasping chants of early summer are now confined in Ireland to some 150 males at the last Atlantic fringe of a range that extends from Connacht to western Siberia.

BirdLife International describes major historical declines of the corncrake in western Europe, notably in the second half of the 20th century. These were mainly due, as in Ireland, to the loss of tall plant cover in reseeded grasslands, and early machine mowing for silage of the bird’s breeding meadows.

Declines have been reversed by conservation in some states, notably the UK. But there have also been big natural fluctuations in the species. In Finland, for example, the corncrake population in 2003-2008 was some five times that in the 1990s.

As a ground-nesting bird, it can be extinguished by repeated years of flooding, as has happened on the Shannon Callows. Seeming scarcity on its wintering grounds in sub-Saharan Africa may be due to the droughts of climate change.

Impacts of extreme weather and agricultural change make predictions difficult. BirdLife International considers that key parts of the corncrake’s breeding range in Russia and Kazakhstan are unlikely to change dramatically. But the chance of declines in western Europe keeps its conservation status “unfavourable’.

Ireland’s new drive to raise numbers, in the “Life Atlantic Crex” project, follows years of paying farmers with corncrakes in their silage meadows to mow them from the centre outwards, giving the birds a chance of escape. It will focus such changes on nine sites in the northwest that are already Special Protection Areas (SPAs) and in the surrounding farmland.

About 1,000 hectares will grow nettles, grasses and wildflowers for the vital nesting cover, including land bought for special measures. An MSc thesis will study which plants do best and a PhD student will track birds with listening-posts and thermal imaging to refine “precision environmental management”.

Such costly attention, for five years, should indeed improve corncrake fortunes at the geographic limit of its range. But the current global extinction crisis is testing a basic challenge of conservation: how to choose which endangered species to save.

The corncrake, for example, is hardly a keystone species for its ecosystem (though more flowering meadows would help pollinating insects). Nor is it threatened by total loss from the planet’s biodiversity, given its breeding populations in eastern Europe.

When a species has such distinctive character and even national cultural significance, its appeal for protection reaches beyond ecology into social history

The EU’s aim to halt the loss of biodiversity by 2020 is still well short of achievement, even with the world’s largest network of protected areas. Its lists of target species are sometimes questioned, both for omitting many endangered species and including others in least need of conservation.

Asked to choose between the corncrake and a threatened but obscure or ugly but important insect, the popular (and thus political) priority seems obvious. When a species has such distinctive character and even national cultural significance, its appeal for protection reaches beyond ecology into social history.

Wikipedia’s corncrake entry attends to its place in literature. It records that in The Pogues’ Lullaby of London, Shane McGowan “uses the corncrake’s cry as a motif to illustrate his alienation in the city. He sings: ‘Though there is no lonesome corncrake’s cry/ Of sorrow and delight/ You can hear the cars/ And the shouts from bars/ And the laughter and the fights ...’”