Is the sap fermenting under the bark of this cherry tree? Readers’ nature queries 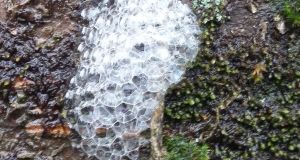 What has caused the bubbles on the bark of a cherry tree in south Wicklow?

I saw these active bubbles on the bark of a 30-year-old cherry tree in the woods in south Wicklow. Is the sap fermenting under the bark? – Philip Quested, Ballykelly, Co Wicklow
There are two possible explanations: that heavy rain gets into a wound in the bark of the tree and interacts with the sap forming a soapy liquid, which is then expelled under pressure; or another, called foamy canker, where bacteria enter through a damaged area of the bark and interact with the wood and sap to produce a foam after heavy rain.

We came across a small beetle on our lavender. It was iridescent and had red and gold stripes. – Paddy Demery, Kilcoole, Co Wicklow
It’s the lavender (also called the rosemary) beetle, Chrysolina americana.

I spotted these beautiful golden beetles at the RSPB Window on Wildlife in Belfast in August. They were about 10mm long. The Ulster Museum identified them as the plantain leaf beetle, Chrysolina banksii. – David Smith, Belfast

This black fox walked across the road in front of my car in Ranelagh. – Aaron O’Brien, Greystones, Co Wicklow
It’s a melanistic fox, which is caused by a recessive gene that allows for greater expression of the dark pigment melanin in the animal’s coat. Black foxes are rare: this is only the second report to Eye on Nature in 30 years.

Every October I notice large flocks of curlew coming to Howth and feeding here unto early spring. Is this common in other areas, and are they different from our native species? – Noel Murphy, Howth, Dublin 13
Curlews migrate here from Scotland, northern England and Scandinavia to spend the winter. They come to locations all over the country and are the same species as our native birds.