Poisoned and preyless: obstacles to rewilding Ireland with eagles 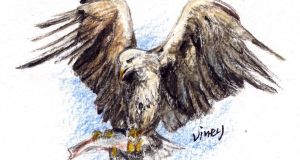 The rewilding of landscapes, now under way at a score of European locations, is intended to restore lost native wildlife to protected habitats. Models of “co-existence” with human residents promise eco-tourism to benefit rural communities (see rewildingeurope.com).

Brown bears, bison, moose and wild horses are involved in “comeback” projects – all herbivores, grazing vegetation. Other species are predators that need live prey, and a vital preliminary to restoration is making sure there will be enough of it.

Wolves and lynxes hunt deer, their natural quarry, of which many countries now have troublesome numbers. Ireland is among them, but tentative suggestions for their reintroduction here, perhaps in “wilderness” uplands, face obvious constraints from farmers.

A pioneer project of Ireland’s rewilding – restoring the golden eagle to the west – has already found the limits to bringing back a carnivore. Along with occasional but still persistent poisoning, in baits left out “for vermin”, the birds can face malnourishment in uplands now widely stripped of cover and food for their prey.

In a column nearly two decades ago (“The prospect of eagles”, November 11th, 1999), I described the “millennium project” to bring eagle chicks from Scotland for careful rearing and release at Glenveagh National Park in Co Donegal. One paragraph ran as follows:

“Reintroductions of such a highly valued species have to meet a stringent set of international guidelines and the project has taken a decade to develop. A study for the National Parks and Wildlife Service compared the amounts of grouse, hares and rabbits living in the home ranges of Scottish eagles to the prey available in Donegal. Kilo for kilo, the food supply seems to be ample.”

Scottish eagle experts approved the collection of 15 chicks a year for five years to found an Irish population. They were raised in woodland cages, then released and fed initially on dumps of deer meat as they explored the crags above Glenveagh.

The subsequent saga of pairing, nesting, attempts at breeding, of life and loss and death of chicks, has been a roller-coaster experience for Lorcan O’Toole, manager for the Golden Eagle Trust. It was closely chronicled in Whittled Away: Ireland’s Vanishing Nature (Collins Press), a recent book by Pádraic Fogarty of the Irish Wildlife Trust.

In concluding that the birds’ breeding population “remains on a knife edge”, Fogarty quoted the Golden Eagle Trust as pinning primary blame on the Department of Agriculture: “Farm policies regarding upland vegetation are the key ingredient ... There is very little habitat reflecting the true potential of Irish upland wildlife.”

Watching a nest at Glenveagh, Lorcan O’Toole spelled it out even more bluntly: “The only question is food. That’s what it comes down to. There is no disturbance, no exposure. The birds are hardy. It’s all about food.”

He is quoted by his companion on the mountain, Mayo poet and naturalist Seán Lysaght. Now retired from teaching at the Galway-Mayo Institute of Technology in Castlebar, Lysaght felt drawn to explore the rich history of eagles in his county. Then, for his engaging new book, Eagle Country (Little Toller), he walked the uplands to which they might return.

Nesting sites used in historical times are now preserved in Irish names for ridges, cliffs and peaks. “Once an eagle rock, always an eagle rock” was the saying that encouraged him, peering over precipices to plot inaccessible eyries.

Carrion up the strand

Lysaght hoped he might encounter a wanderer or two, either golden eagles from Donegal or sea eagles from Kerry. Since their reintroduction there, the white-tailed sea eagles have travelled widely, breeding successfully in Cork, Kerry, Clare and Galway and catching their fish from ocean bays and inland lakes.

Both eagles share an appetite for carrion (a pair from Kerry once touched down on our strand to sample a dead dolphin). This has left them vulnerable to poison, and Lysaght names the toxin that has widely succeeded strychnine: nitroxynil, a farm drench against liver fluke in sheep.

Much in his long season of wandering, walking and camping on the heights of north and west Mayo, proved idyllic, with skinny-dips in mountain tarns, awesome views of “uncalibrated space” and times when “the land was singing” with birdsong and wind. Lysaght celebrates it all with a poet’s elegance of language and a deep knowledge of nature. But his journey also met quad bikes, rubbish dumps and too many sheep. Overgrazed, heatherless, grouseless stretches offered angering “desolation”.

Golden eagles, meanwhile, are still held chiefly to Donegal, with pairs spreading out from Glenveagh to the Bluestack mountains and the peninsulas of Inishowen and Glencolumbkille. Chicks fledged last year, in what the trust termed “a memorable season”, added three healthy juveniles to the small and fragile population of 20-25 birds.

Lysaght saw one sea eagle by chance, at journey’s end in October, “a great big lumbering bird in a murk of rain and swarm of crows” flying on its way to Lough Mask.