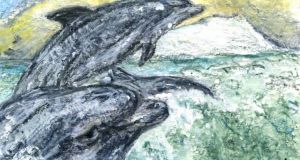 The shiny black backs that came curving along the waves behind me were those of bottlenose dolphins, out for their own kind of fun. Picture: Michael Viney

On a frosty morning after Christmas in our first winter in the west more than 40 years ago, I went walking north along the shore. An early stretch, once I’d left the strand, was an obstacle course of rocky headlands and ravines, an old grass road scalloped on eroding cliffs and hurdled with the tangled ends of fences.

But the whole arc of mountains from Achill to Renvyle were gleaming with snow. And at Carrowniskey Strand, with the wet sand as a mirror, Clare Island floated offshore like a great white sail.

Carrowniskey shelves slowly into the deep, its long terraces of breakers piling up into crests that today bring many surfers to this shore. But the shiny black backs that came curving along the waves behind me were those of bottlenose dolphins, out for their own kind of fun.

“Then came half a dozen more,” I reported in this column, “cavorting in the wintry surf as if Mayo were in west Africa.” Which tells how much I knew about bottlenose dolphins – or “Huzza Porpoises”, as the headline boldly and ignorantly proclaimed.

I had borrowed that phrase from Melville’s Moby Dick and his term for the “hilarious shoals” that so often shadowed his whaler. “If you yourself can withstand three cheers at beholding these vivacious fish,” he wrote, “then heaven help ye; the spirit of godly gamesomeness is not in ye.”

My own godless spirit was, indeed, exalted by the exuberance of the “porpoises” playing tag among the breakers and leaping from the water in glittering founts of spray. Their play seemed quite deliberate, a performance for the solitary human figure on the shore, Then they calmed down and swam on.

My use of “porpoises” is still mortifying, but I had yet to learn about the mammals of the sea. Porpoises are the commonest and by far the smallest of Ireland’s 24 species of cetacean, and their shoals have little aspiration to hilarity. Some big Scottish bottlenoses even beat them up.

My magical visitors, I know today, were from a large social community of bottlenoses based off the coast of Connemara and west Mayo. Some 200 have been photographed for the IWDG’s photo ID catalogue. But 40 years ago, cetacean wildlife was almost blanked from Irish natural history.

Before marine scientists and fellow enthusiasts formed the IWDG (Irish Whale and Dolphin Group) in December 1990, the variety and extent of our cetacean life was held in random records of stranded corpses and in the logbooks of a small Norwegian whaling enterprise based briefly on the Mullet, in north Mayo.

As top predators in the ocean, the dolphins, of which orcas are the biggest, accumulate the most man-made toxic pollutants

Today’s research cruises and postmortems have been building the story of cetacean biology, lifestyle and pathology. This action for conservation was implicit in Charles Haughey’s 1991 declaration of Ireland’s pioneering whale and dolphin sanctuary .

Just a few weeks ago came results of a study by Galway Mayo Institute and the Marine Institute. It analysed blubber samples from three killer whales, or orcas, stranded dead in Galway, Mayo and Waterford, and from a near-term calf inside one of them.

The tests were part of intensive global monitoring of the impact on cetaceans of toxic industrial chemicals and pesticides. The chemical concentrations in the Irish blubber were disturbingly high, but still far from those found in some parts of the Mediterranean and elsewhere. In an earlier world-wide survey of dolphins and porpoises, bottlenoses resident in the Shannon Estuary showed the lowest concentrations of all.

As top predators in the ocean, the dolphins, of which orcas are the biggest, accumulate the most man-made toxic pollutants, in particular the persistent polychlorinated biphenyls (PCBs). Their “biomagnification” in cetacea was first detected in the 1960s, when PCBs were still widely used in insulation of electrical equipment.

They were phased out in the EU in the mid-1980s, to good immediate effect, but their persistence is still echoed in the dolphins. Reproduction can be suppressed and females pass PCBs into their offspring. One pod of orcas, living between northwest Scotland and Ireland, has not produced a calf in 19 years of observation.

Meanwhile, Ireland’s best-known bottlenose, the loyal Fungie of Dingle Harbour, was admitted last September to the Guinness Book of Records as the longest-lived “solitary-sociable” dolphin on record. He first appeared off Dingle in 1983, which puts him as the earliest of 114 living, solitary and mostly bottlenose dolphins engaging with humans on shores around the world. The report on them, Lone Rangers, was prepared by Marine Connection, a UK-based animal welfare charity (at marineconnection.org).

Much less eager for human encounters and lately gashed by a boat propeller, Fungie is nearing the 40 years reckoned as the limit to the lifespan for his kind. His relationship with people has been remarkably free of the misunderstandings, sometimes sexual or aggressive, that have marked some Irish bottlenose encounters.

For the IWDG, even sociable wild dolphins are best left to wild lives.