Cattle have a bad rap in the climate debate, but they can be good for the environment 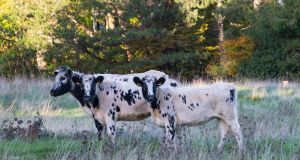 Could cows be the new lawnmowers?

Cattle have got a bad rap in the climate debate. Their unfortunate flatulence produces methane emissions, and that’s certainly not good news. But, under some circumstances, they may actually be climate positive, if a pilot project in south Co Dublin has got it right.

Deirdre Donnelly, leas cathaoirleach of Dún Laoghaire-Rathdown County Council, recently introduced a discussion on “eco-grazing”. She explained how a rare Irish cattle breed is beginning to enhance biodiversity, education and recreation in a new public park while, arguably, reducing greenhouse gas emissions. It’s encouraging to see public representatives get behind innovative schemes that might have been dismissed as just plain daft, not so long ago.

She spoke, too, of how the council had substituted alternative controls for herbicides and pesticides, “and we even leave weeds be, where appropriate”. This is a far cry from the times when, as the council’s senior park supervisor, Ruairí Ó Dúlaing, said later, “we were taught how to kill everything with chemicals”.

Some citizens, accustomed to manicured road margins, and parkland meadows smooth as billiard tables, were uncomfortable with the new “untidiness”. However, Ó Dúlaing knew public taste was shifting when a “a little old lady approached me and complained that we had ‘mowed the dandelions too early this year’”. Weeds were revealing themselves as wildflowers.

The cows come into this picture, so far, in just one place in his area, but they may be a template for the future.

The former owners of Fernhill, near Stepaside, transformed 34 hectares on the lower skirts of the Dublin mountains into a remarkable woodland-garden. Over many decades, it became home to a rich collection of exotic rhododendron, magnolia, camellia and fern species, towered over by sentinel conifers like sequoia and western red cedar.

Most of the estate was bought by the county council in 2015, and is already popular with local walkers. A badly needed car park is under construction.

Beneath the woodlands, wildflower meadows fall away steeply to the Enniskerry road. And it is here, to the evident delight of visitors, especially younger ones, that you can see half a dozen unusual young heifers grazing through the winter.

They are Droimeann, the Droimeann Donn Dílis of the well-known Irish poem, and the rarest of just four remaining native Irish cattle breeds. The Droimeann Cattle Society was set up in 2016 to rescue the Droimeann from extinction.

This breed is small and nimble, very varied in colour but usually attractively speckled with white or black, with a hallmark white stripe down its back. But what is this breed, whose last stronghold is in Munster, doing on the edge of Dublin suburbia?

Anne Murray, the county council’s biodiversity officer, explains: “We found the meadows at Fernhill had not been mowed, or fertilised, for decades, but had always been grazed. If we wanted to maintain them as wildflower meadows, we needed grazing cattle.”

Local resident Ella McSweeney had done an RTÉ report on the Droimeann and mentioned the breed to Murray as an option.

She credits Hans Visser, her counterpart on Fingal County Council, for the other half of her inspiration. He introduced Highland cattle to several parks there some years ago (https://www.irishtimes.com/news/environment/gentle-giants-that-could-enrich-our-parks-1.1624517). But this is the first use of cattle on public parkland south of the Liffey.

Murray lists a remarkable number of conservation benefits associated with grazing, as opposed to mowing.

“Cattle remove plant material more gradually than cutting and give mobile species such as insects, birds, reptiles, amphibians and small mammals, a better chance to move to other areas within the meadow.”

Crucially, as in the Burren, grazing back the winter grasses gives the wildflower species a head start to emerge and flourish in the spring.(https://www.irishtimes.com/news/environment/a-perfect-day-for-a-cattle-drive-seasonal-movement-benefits-both-land-and-animal-1.4080492).

The timing of grazing is also critical to enhancing wildflower diversity. Previously, Fernhill meadows had been grazed as early as August, which prevented late-flowering species setting seed. Now the Droimeann are introduced in October, when most seed-heads have already been scattered. They will stay until March, when their owner, Pádraig Fuller, will take them back to Kerry. Soon afterwards, the wildflowers they have unwittingly assisted will be carpeting Fernhill’s pastureland.

This regime has only been in place since 2018, so it’s too early to say with certainty how well it’s working. However, a survey has already found several species previously unrecorded in the meadows, including an orchid.

The Droimeann, small and light on their feet, are particularly suitable for the thin soil and steep, sometimes rocky, Fernhill slopes. They can graze where heavier cattle would either not go at all, or churn up the earth.

Murray points to other benefits, such as the increasing evidence that engagement, even at a distance, with animals and nature boosts the physical and mental health of visitors.

But how can grazing cattle be climate positive?

Murray argues that the methane problem becomes acute only when cattle are grazed intensively on highly fertilised land, and artificially fed. Six heifers, roughly one per hectare here, generate much fewer emissions. Meanwhile, no fossil fuels are used by mowing machines, and no green waste is produced, while the grazing cycle captures carbon in the wildflower meadows. It certainly sounds like a virtuous circle.

A cattle drive across the Liffey?

Even on a winter afternoon, Fernhill is a place of enchantment. The richly varied evergreen woodland understory and canopy is still lush, offering plenty of scope to young and old imaginations.

The meadows are seasonally bereft of blooms, but still form a relaxing open zone, animated by the Droimeann, between the shadowy wooded upper paths and a busy road.

The cattle have thoroughly grazed the upper meadow, but the grass still stands tall in the lower one. It’s time to move them over.

Pádraig Fuller arrives, accompanied by Tom Keane, a leading light in the Droimeann Society, and some of the other participants at the Dún Laoghaire-Rathdown County Council eco-grazing discussion. It’s not quite a Burren Winterage, but there is a distinctly festive mood, as the cattle rush through opened gates to graze the feast awaiting them in the second pasture.

In conversation, the outline of a new dimension to the project, a new set of human and environmental linkages, emerges. Stephen Hayden, of the Ballymun City Farm Committee, asks Fuller if it would be possible to bring the next Droimeann generation as calves to Dublin, and raise them initially on the northside. Fuller agrees warmly that it would.

The City Farm is still on the drawing board but advancing fast. The two men begin to sketch out what could happen. Ballymun schoolchildren could help raise the calves in summer, giving them pet names. They could welcome children from Dún Laoghaire-Rathdown to visit them, and there could be a celebratory transfer to Fernhill in autumn – and perhaps, just perhaps, a cattle drive from Ballymun to Stepaside.

In due time, the next generation of calves would come to the north side, named after their mothers, and giving the kids there a sense of continued engagement with the herd.

And as the heifers in Kerry mature into dairy cattle, their milk, butter and hopefully cheese could be despatched to schools in Ballymun and south County Dublin familiar with the herd, dispelling the notion that milk products grow on supermarket shelves.

Synergy and sustainability are overused words, but they seem very appropriate to this project.