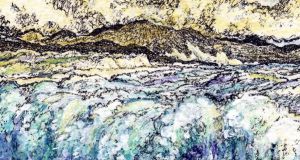 “Without warmth released from the Gulf Stream in the north Atlantic, our winters could be about 5 degrees C colder and the storms could get even fiercer.”

It is, quite preposterously, 2020, far further into my future than I ever expected to get. I should have prepared something appropriate for such a portentous date, but the important things have been said already already, day after day, not least by the estimable Greta, scourging the powerful through flinty eyes like some oracular Gaia.

How long have I been writing here about climate change? In February 1991, after a notably bad western storm – fields stripped of fences and buried in stones, rocks hurled though windows, dunes carved away – I could warn of “oceans of changes to come” and “increasingly awesome impacts” of global warming.

In 1990, the Intergovernmental Panel on Climate Change (IPCC) made its first assessment, prompting an immediate “environment action programme” by the Irish government. Twenty sectoral experts were briefed to assume a temperature rise of 2 degrees Celsius by 2030, a rise of 10 per cent in winter rainfall and a mean sea-level rise of 18cm. The rainfall and the sea levels, at least, were typically over-cautious.

The report was substantial and diligent and my copy is full of underlinings: carbon loss from drying bogs, Kerry slug spreading northwards, serious floods lasting longer, and so on. But much of it was still “best guess”; the big scientific unknowables were still to come, and any national “action programme” hard to identify.

A jump to today is to leap over decades of field research and much scientific modelling of projected probabilities. Climate models have been a frequent target of those dismissive of the science, arguing that their necessary approximations can say nothing meaningful about the future.

Some 20,000 peer-reviewed studies on climate change published in a year offer ample targets for attack. An upcoming paper in Geophysical Research Letters, however, by a research team at the University of California assessed the predictive accuracy of 17 climate models published between 1970 and 2000. These were relatively primitive models, made before supercomputers and at a time when the link between CO2 emissions and rising global temperatures still seemed arguable.

Even in the Irish “action programme” of 1991, Met Éireann meteorologist Brendan McWilliams could caution: “There is, of course, considerable uncertainty as to whether or not the enhanced ‘greenhouse effect’ will affect global climate.” But 14 of the 17 projections of temperature and CO2 closely matched what actually occurred (discussed at realclimate.org/howgood).

The “tipping points” of abrupt and irreversible climate change remain mercifully harder to predict. But their probability was assessed unsparingly in the journal Nature in November. A team of well-regarded climate scientists charged that potentially damaging cascades of impacts present “an existential threat to civilisation”.

When the idea of such “large-scale discontinuities” was framed by the IPCC, the risks were linked only to a global warming of 5 degrees C above pre-industrial levels. The panel now suggests that tipping points could be exceeded even below global averages of 2 degrees C.

The pace of melting of ice at both poles is crucial. In west Antarctica, says the team in Nature, the ocean’s undermining of ice shelves already threatens a domino-like collapse of ice sheet leading to three to four metres of global sea level rise “on timescales beyond a century”.

In the Arctic. the flood of fresh water from the melting Greenland ice cap may already have slowed the ocean circulation system that draws tropical warm water north in the Gulf Stream and its branching North Atlantic Current. The dense, salty water, flowing in the upper layers of the ocean, sinks massively between Iceland and Norway to flow back along the bottom ocean to Antarctica and round to surface in the Pacific.

This is the Atlantic Meridional Overturning Circulation, vital to the balance of global climate. Its flow has come under intense study, but the lack of a long record makes its variations hard to assess. The November Nature paper spoke of a 15 per cent slowdown since the mid-20th century. Any major response would bring the risk of impacts much closer than centuries or millennia.

In the somewhat ambiguous view of the UK Met Office, “A shutdown in the 21st century is considered very unlikely (though plausible)”. Last month, however, Nature published the finding that Greenland’s ice sheet is melting seven times faster than in the 1990s. The scale and speed of ice loss are much higher than had been predicted and based on direct observations and satellite measurements, not modelling.

Without warmth released from the Gulf Stream in the north Atlantic, our winters could be about 5 degrees C colder and the storms could get even fiercer. Ireland, after all, shares latitudes with Newfoundland and Labrador. This, I’m reminded, is the jagged, snow-showered, stormswept shoreline of Annie Proulx’s Pulitzer-winning novel The Shipping News, “an inspiring comedy of human life and possibility, an exhilarating Atlantic drama”.