Did one of Santa's reindeer end up in our garden? Readers' nature queries 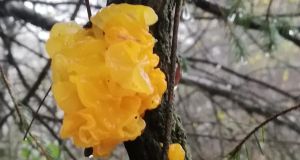 I found this creature alive in a packet of raspberries that I purchased before Christmas. The country of origin was Morocco – Anne Healy, New Ross, Co Wexford.

It’s a seed bug, Spilostethus pondurus, which is common in Mediterranean countries. They are a pest of cultivated crops.

The newly opened walk around Wicklow Head has caves, coves, beaches and inlets. From one cove I saw a sizeable yellow oil can bobbing in the tide. Then a seal came up and started to nudge it with her nose. A bull followed and for 20 minutes I watched them play with the can, batting it with their flippers, poking it with their noses and even attempting to climb on it. – Paddy Demery, Kilcoole, Co Wicklow

On a cold, bright morning in early December I saw 20 waxwings – a museum, I believe – of feathered jewels feeding on the berries of a rowan tree. – Paul Grant Letterkenny, Co Donegal

I saw this gorgeous fungus growing on trees near Killaloe, Co Clare, and wondered what it was. – Maeve O’Reilly, Dooradoyle, Limerick.

We were very excited before Christmas to see that Santa sent one of his reindeer to our back garden to check that our children were being good. – Andrew Synnott, Brittas Bay, Co Wicklow

Santa probably couldn’t spare one of his sleigh reindeers and deputised one of the local Sika to check.

This amazing structure is a wasps’ nest in the wood shed. It’s about 3ft by 2ft, beige colour rather than grey, and paper light. The wasps didn’t look like the common wasp and were slightly smaller. – Deirdre Rowsome, Killaloe, Co Clare.

There are two wasps in this country that would build nests of that size: the common wasp and the German or European wasp. The latter is slightly smaller than the common wasp.

Ethna Viney welcomes observations and photographs at Thallabawn, Louisburgh, Co Mayo, F28 F978, or by email at viney@anu.ie. Include a postal address, please.