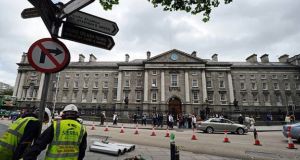 Dublin Chamber says it is “vital” that College Green continues to function as a “transport artery” after the plaza is built. Photograph: Getty Images

Dublin Chamber of Commerce is backing Dublin Bus in its bid to keep running buses through College Green, which Dublin City Council wants to turn into a pedestrian- and cyclist-only plaza.

In a submission to An Bord Pleanála in recent days, the city’s largest business organisation said banning buses from College Green would “weaken the attractiveness of the bus in the eyes of the commuter”.

The council sought permission from An Bord Pleanála last May to build the €10 million civic plaza and ban access to and from Dame Street through College Green for all traffic including buses.

The council had hoped the planning board would deliver its decision ahead of the start of operations of the new Cross City Luas, which began services at the weekend, but last month the board announced it would not be issuing its decision before next April.

The delay is to allow the public time to assess significant new information provided to the board by the council about the traffic impact of the project.

The board sought the new information after concerns were raised by a number of organisations about the potential for traffic problems. Dublin Bus told the board the council’s plans were “socially regressive” due to the fact that buses travelling from poorer areas would terminate further from the city centre.

Dublin Bus wants to keep running buses through College Green, and has suggested the plaza be built on one side of the road only.

In its new submission to the board, Dublin Chamber said it was “vital” that College Green continued to function as a “transport artery” after the plaza was built.

It said it was “unconvinced” by the council’s plans, and was concerned about the impact rerouting buses from College Green would have on the numbers of people coming into the city centre.

While the business group said pedestrians should be prioritised in College Green, it said the support of the city’s main transport providers would be critical to the success of any future plaza. “The chamber is very concerned the proposed changes to bus routes around College Green will weaken the attractiveness of the bus in the eyes of the commuter.”

The council has told An Bord Pleanála that diverting buses from College Green to “what is now a high-performance public transport corridor along the quays” would improve bus services.

Bus users may have an additional four- to five-minute walk to reach their previous College Green stop, the council conceded, but it said the plaza would not function as intended if buses were allowed use the space.

“It is not possible to maintain pedestrian priority in a shared space with buses; this area would need to be controlled by traffic signals, and have a raised kerb in order to delineate it. These measures would be contrary to the philosophy and intent of the space.”

The plaza plan would also improve the general environment in the area, the council said.

“The closure of College Green to all traffic, and the re-routing of most bus services and taxis away from this location, will greatly reduce the traffic volumes along Dame Street to and from College Green.”

Buses will continue to use College Green pending the board’s decision on the plaza. However, the council has said it will reassess the use of the area by private cars and taxis in the New Year, particularly if they cause delays to the new Luas service.