Delayed decisions could cause havoc in College Green 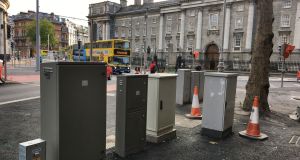 Plaza planned for College Green: “It’s a radical change in how we see the city centre and that doesn’t happen very quickly.” Photograph: Bryan O’Brien

More than a decade ago, the now-defunct Dublin Transportation Office proposed banning private cars from driving through the core of Dublin city centre, from Christ Church Cathedral via College Green to O’Connell Street.

The plan originated from two years of fractious talks with the Railway Procurement Agency, Dublin City Council and Dublin Bus on how the city centre would function after the arrival of the Luas “missing link” line to connect the Red and Green lines.

Two years on, in early 2009, plans for the College Green “bus gate” were produced to block all but public transport from Dame Street.

However, by the time the bus gate was put in place later that year, this had been watered down to a 7am-10am and 4pm-7pm weekday ban.

The Railways Order to allow the Luas link to go ahead was granted by An Bord Pleanála in August 2012, and in mid-2014, when the heavy duty phase of the work on the line began, the bus gate restrictions were extended to 7am-7pm from Monday to Friday.

Another year on, in September 2015, then executive manager of the council’s traffic department, Declan Wallace, said the College Green traffic changes needed to be agreed “urgently” to be in place ahead of the start of operations of the Luas at the end of 2017.

In April 2016, the plans for the pedestrian-and bicycle-only plaza at College Green were produced. At the formal unveiling, the council said it expected the plaza to be in place by June of this year.

Dublin Bus head of operations Donal Keating, though not falling over himself with enthusiasm for the plan, attended the announcement and said: “Given the complexity of what has to be done here, I can see why this option was chosen.”

In October of that year, following a public consultation during which businesses again voiced their opposition, the council announced it would submit the plan to An Bord Pleanála the following March. It did not do so until May.

Then Dublin Bus threw a spanner in the works. More than a year after it appeared to sign up to the plaza, it made a submission to An Bord Pleanála branding it “socially regressive” and saying it wanted to keep running buses through College Green.

Following this and other submissions, the board announced the plans would have to be subject to another round of public consultation and it would not be making a decision on the plaza until April 2018.

“I wouldn’t entirely agree that we changed our tune,” Keating says. “But we looked at all of the issues and we put forward some suggestions as to what we think might be a better way of operating. Some people are looking at that and saying we’ve objected to the College Green plaza – and I suppose it’s a way of putting it.”

Keating’s better way is to keep buses running from Dame Street through College Green northbound, and use Parliament Street for southbound buses.

“If buses coming into town from George’s Street, Thomas Street and Patrick Street that come around the front of Bank of Ireland, could continue to operate in that direction, and the buses going out of town would be able to use Parliament Street , then we think that is the best option from an accessibility point of view.”

In his assessment, it is the council that moved the goalposts, having proposed two-way bus routes on Parliament Street in April 2016, but then not having included that option in it application to An Bord Pleanála.

If the council reverted to this plan “it may not be the worst solution”, Keating said.

Brendan O’Brien of the council’s traffic department said it had considered leaving buses northbound through College Green. “When we looked at the space that would be left and what we’d have to do to accommodate buses through there, it would be a much wider footpath but it wouldn’t feel like a plaza, it wouldn’t be possible to have events there.”

Two-way running on Parliament Street was discounted for environmental reasons, he says.

Defending the length of time it has taken the council to take action in relation to College Green, O’Brien says it had required a major rethink on traffic movements throughout the city.