What are the prospects for future Luas lines? 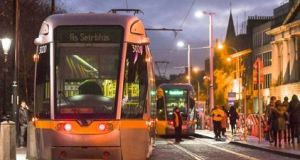 Since the Red and Green lines opened in 2004, they have been extended three times. Photograph: Getty Images

The success of the first two Luas lines with their mostly reliable journey times and the positive impact on property prices led to a clamour from politicians and their constituents for more trams in Dublin and across the country.

Everyone, it seems, loves a Luas, but what are the prospects for future lines?

Since the Red and Green lines opened in 2004, they have been extended three times. The Red line was first to be extended from Connolly Station to the Point in December 2009, followed by the Green line from Sandyford to Bride’s Glen in July 2010, and then another lengthening of the Red Line bringing it west to Saggart, almost at the Kildare border.

However, there were more ambitious plans for the Luas back in the day – the day being the boom and more specifically the 2007 election campaign.

During that campaign Fianna Fáil and the Green Party both announced plans for tram systems in Cork, Limerick, Galway, Waterford and Bray. The 2007 programme for government between these two parties and the Progressive Democrats included a section which ensured feasibility studies would be carried out on these projects within the first two years of the government. Cork and Limerick were expected to complete their studies by mid-2009.

These regional tram lines never happened. All such plans evaporated with the financial crises, and no studies were completed except for the line to Bray.

It was initially proposed that the extension to the Green line would run all the way to Bray from Sandyford, but this aspiration was scaled back to a two-stage solution, with the first section of track running to Bride’s Glen, followed swiftly by the line’s first foray outside the capital to connect with the Dart at Bray.

In 2006, the Bray line had a target opening date of 2015 but this was put on the long finger when the crash hit.

In 2008, plans for another south side line were scotched. Line E was to run from Dundrum to the city centre via Rathfarnham, Terenure and Harold’s Cross.

In May 2008, the Railway Procurement Agency (RPA) determined the line would have a negative impact on traffic, would require the acquisition of 150 private gardens and would be unlikely to meet its operating costs.

A west Dublin project fared better that same year – the Lucan Luas, line F. This got as far as choosing a preferred alignment in October 2008. It was to run from Lucan to connect with the Red line at the Blackhorse stop near Inchicore, and would go its own way again at St James’s Hospital, where it would run to Christchurch, Dame Street and College Green.

In 2010, the RPA changed its mind and said it would prefer to connect the Lucan Luas to the proposed Dart underground line at Inchicore.

Focus shifted in the following years to the Dart Underground, Metro and Luas Cross City, and securing permission for those projects. All three had railway orders granted by An Bord Pleanála between 2011 and 2012, and while the Luas is the only one to go ahead, the Government remains adamant that all three are still on the cards.

This commitment was confirmed in 2015 in the draft Transport Strategy for the Greater Dublin Area for 2016-2035, which was then approved in 2016.

This strategy also set down the potential for future Luas lines – Bray and Lucan were back on the scene.

No time line has been put on the development of these new lines, but a “phasing” plan would see the Lucan Luas developed first, followed by Poolbeg, Finglas and Bray.

Given the dashed hopes of some communities which saw their Luas dreams drift away over the years, there may be some scepticism over the prospects of the new lines.