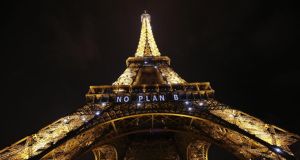 No plan B: the One Planet Summit is being held two years to the day since the landmark Paris accord on climate change was agreed. Photograph: Patrick Kovarik/AFP/Getty

France will push for a European financial-transactions tax to fund the fight against climate change, four French government ministers have said ahead of a global climate summit in Paris on Tuesday.

The tax could raise up to €5 billion a year by 2020, according to a joint opinion piece by finance minister Bruno Le Maire and environment minister Nicolas Hulot, among others, published in a French Sunday newspaper.

Tuesday’s One Planet Summit, which is being held two years to the day since the landmark Paris accord on climate change was agreed, brings together 50 heads of state, 4,000 other participants and 800 organisations to explore ways to “climate finance” projects to counter climate change. The Irish delegation will be led by Minister for Climate Action and Environment Denis Naughten.

The ministers said France had already put in place a financial-transactions tax that helps fund its environmental policies. “We will push for this tax to become applicable in Europe and will ask everyone to take part in this solidarity effort.” In 2012 France introduced a 0.2 per cent tax on purchases of shares in French companies with a market capitalisation of at least €1 billion. It raised €1.1 billion in 2016.

France and Germany have long led efforts to create a financial-transactions tax. Ten countries have signed up in principle, but not Ireland. Talks have dragged on since 2011 as countries struggle to agree about how it would work.

The French president, Emmanuel Macron, will press rich countries to increase climate financing on Tuesday and urge investors worldwide to turn their backs on polluting industry and energy generation associated with high carbon-dioxide emissions in a bid to accelerate efforts to combat global warming. There will be a focus on how public and private financial institutions can mobilise more money and the need for corporate businesses to decarbonise more.

An Élysée Palace official indicated that 12 “concrete projects” would be announced at the summit but that there would be no internationally binding commitments.

Recent climate talks in Bonn were supposed to agree on the Paris accord rule book, but stalling on climate finance for developed countries dragged out negotiations. Richer countries have yet to fully commit to a promised €100 billion a year, yet alone to the trillions of euro estimated to be necessary to keep the global temperature rise to less than 2 degrees this century, let alone the 1.5 degrees agreed in 2015.

Mr Naughten said the summit would build on Bonn, where progress was better than expected. There was now a shift to implementation of the Paris accord and actions to be pursued, particularly in mind of 2030 targets, both at EU and state level.

The issue of climate finance was coming up a lot and the need to get finance ministers to help fund climate projects. For Ireland, borrowing options were curtailed due to the stability and growth pact but other EU countries were also finding it difficult to come up with “the scale of investment required”.

“We need to engage finance ministers to invest, and invest early,” he added, if the environmental benefits were to be fully realised.

There was an onus to ensure not just public funds were made available but also funds from the private sector and from consumers themselves where it was needed. Mr Naughten said he hoped a new behavioural economics unit within the Sustainable Energy Authority of Ireland would come up with initiatives over the next year to help fast-track Ireland’s transition to a low carbon economy.

The position taken by Mr Macron in Bonn was very interesting, Mr Naughten added, notably his bringing climate into trade discussions. If climate issues were part of new trade deals, it would bring a very different perspective to the fore.

Mr Naughten believed significant momentum had been achieved in recent months in Ireland on climate actions including the national support scheme for renewable heat; a ban on smoky coal, and supports for the adoption of electric vehicles. “Inevitably in this area there can be a long lead-in time, which can be frustrating. Things are beginning to happen but I accept there is a lot to do.”

This week’s summit offers a chance for concrete advances in the fight against global warming, even without the support of President Donald Trump, according to the president of the World Bank, Jim Yong Kim. “What makes this summit different is that this is not just another high-level political meeting. This is going to bring together groups of people that normally don’t get together, especially in talking about climate opportunities.”

With the International Energy Agency estimating it will take €3 trillion a year for the next 30 years to contain the rise of global temperatures, the summit needed to scale up financing that still falls far short of meeting Paris-agreement commitments, he said.

The World Bank, which is one of the summit’s sponsors, has pledged to increase its funding for climate projects by 28 per cent by 2020. This year it committed €10 billion to more than 200 climate-related initiatives.

The main focus will be to determine how those working in public and private finance can innovate to support and accelerate our common efforts to fight climate change, Mr Macron has said. “There are solutions. Let’s roll them out globally and locally as swiftly as possible,” he added. “Let’s be creative and resourceful in adapting our systems to the inevitable changes and step up our efforts to reduce greenhouse-gas emissions.”

Everyone was being affected by climate change, “but some of us are more vulnerable than others. Let’s work together for the good of all and increase our support even more to the countries and peoples who need it most,” Mr Macron said.

“Hollow promises will have no place at this gathering. Only real commitments of real money for tangible projects will be discussed,” said the head of the European Climate Foundation, Laurence Tubiana. “As a result we hope to see hundreds of millions of dollars committed by governments to fund solutions across all fronts of the climate-change battle.”

Money would go to renewable-energy projects, clean transportation, agriculture, infrastructure, and carbon efficiency, she said. “Funding will also be earmarked for projects that help protect communities that are most vulnerable to the impact of global warming.”

The summit will also consider how best to support cities, states and regions across the world that are making strong commitments on climate action. – Additional reporting: Reuters