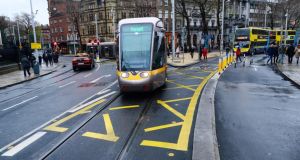 House prices were most modest along the Luas Cross City line, with the city centre section from Dawson Street to Westmoreland commanding the highest prices. Photograph: Cyril Byrne / The Irish Times

Residential property prices along the new Luas Cross City line have risen at more than twice the rate of homes along other Dublin rail lines in the last year, according to new research.

Estate agency website Daft.ie found buyers living on the Dart line still pay the most for their homes, and houses along the Green line from Cherrywood to St Stephen’s Green remain more expensive than those along the Red line from Tallaght to the Point.

Some of the most expensive homes were close to Sandymount Dart where asking prices averaged at €784,000, followed by Lansdowne Road at €737,000.

Three-bed houses near the Luas Green line Beechwood stop in south Ranelagh were priced at €727,000.

Prices were most modest along the Luas Cross City line, with the city centre section from Dawson Street to Westmoreland commanding the highest prices – €519,000 the average asking price for a three-bed, followed by Phibsborough at an average of €425,000, and Broadstone, near the new DIT campus at €410,000.

The Cabra end of the line saw lower prices, with an average of €410,000 near the Cabra stop, which serves parts of Phibsborough, and €322,000 near Broombridge which serves west Cabra.

However, Daft.ie economist Ronan Lyons said these Cross City line prices, while still lower than other rail lines, have risen considerably this year.

“The opening of the cross-city Luas has clearly added value in the areas newly served by light rail: three-bed homes near the new Luas stations saw their values increase by 15 per cent over the last year, compared to a 6 per cent increase in similar homes near other rail stations.”