Eye on Nature: A common surface for nostoc is limestone gravel, used throughout Ireland on paths, drives and flat roofs 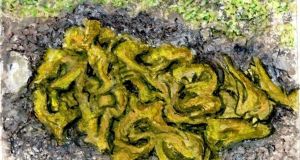 Blobs of strange, sometimes repellent, substances, appearing suddenly on the ground, have puzzled people for much of history. Queries to “Eye on Nature” often offer three separate examples.

In times past, popular explanations looked to the sky for the origin of translucent goo, deposited on grass or branches of trees, and thus became “star jelly”, perhaps brought down in meteor showers.

Research at Britain’s Natural History Museum traced samples to the unfertilised spawn of female frogs, coughed up from the gullets of predatory herons.

Seasonal moisture counts more in other, more regular, mysteries. Slime mould is a strange, cellular organism that is neither fungus nor animal but shares ancestry with both. Scattered masses can look like scrambled egg or dog vomit and can actually creep about, if very slowly, in search of bacterial food.

Another rain-loving organism, appearing suddenly on gravel paths, is like glossy and slippery seaweed when swollen with water, and dog-shit when flaccid and dry. In neither form have “Eye on Nature” readers found it welcome underfoot, especially in well-manicured gardens.

This one is nostoc – in science, Nostoc commune. Long intrigued by its odd name, I set out through Google’s spider-web of knowledge and ended up at an ecological story as broad as the planet itself.

As one of the algae, the first stop for nostoc was at Seaweed.ie the online encyclopedia created and curated by Prof Michael Guiry of NUI Galway. He shows examples of “witch’s butter” (also a folk-name) from paths in the university grounds. Another that he photographed, used for my drawing, was glistening this autumn at the base of a city wall.

A common surface for nostoc is limestone gravel, used throughout Ireland on paths, drives and flat roofs and especially inviting to nostoc in the ever more showery, poorly-drained west.

Dr Guiry found nostoc – in the wild, as it were – on sand dunes on Clare Island, where calcium is offered, instead, in the powdered shells of marine molluscs. And nodules of a similar nostoc species litter limestone hollows of the Burren.

Dr Guiry accords nostoc the same stellar folklore as the regurgitated frogspawn. This is echoed by an American scientist, Malcolm Potts, who has explored the original naming of nostoc (in International Journal of Systematic Bacteriology, April 1997).

It was coined, he suggests, by the 15th century German scientist, philosopher, folklorist and alchemist remembered respectfully as Paracelsus. Familiar with “the gelatinous colonies of the ubiquitous terrestrial cyanobacterium Nostoc commune”, Potts proposes, Paracelsus played on fables of “excrement blown from the nostrils of some rheumatick planet”.

In “nostoch” – first with an “h” – aracelsus melded German and Old English words for the nose. Potts points to the alga’s distinctive, earthy smell and the flow of its prodigious swelling in the rain. (“Star-snot” is also among folk names for the errant frogspawn jelly.)

The dramatic inflation of nostoc adds to its fascination as an organism of dormant perhaps even “ancient” cells, tolerating long periods of desiccation before revival by rain and spreading when broken into fragments. More research led by Malcolm Potts found that drying out for up to 60 years can leave its cells undamaged and ready to swell again, which may explain some of its appearances “from nowhere”.

Nostoc has no need to be “for” anything of human benefit: its value is to many natural ecosystems

As a cyanobacterium, or blue-green alga, nostoc belongs to the vastly varied global tribe of microbes which, more than two billion years ago, began producing oxygen through photosynthesis, thus creating the atmosphere that lets us breathe.

But nostoc has no need to be “for” anything of human benefit: its value is to many natural ecosystems. Deserts of the southwest US, for example, Nostoc commune is part of surface crusts that, as a sink for CO2 and fixer of atmospheric nitrogen, help the stability and fertility of the soil and the growth of its lichens and mosses.

Complaints about Nostoc commune (even some by lawn-proud gardeners in New Zealand) fit oddly with reports of its use as food and the possible risks in eating a lot of it. Dr Potts takes the story back some 1,600 years to China, when the alga “was used as a staple food by Hung Ge, a renowned alchemist and hermit”.

A different, filamentous, species of nostoc is also used today in making China’s bird’s nest soup. But concern about current consumption of Nostoc commune in the highlands of Peru and in city folk markets and restaurants came in 2008 in the Journal of Ethnopharmacology.

The alga, reputedly highly nourishing in the rainy season, was found to produce a neurotoxic amino acid suspected of links to Alzheimer’s or Parkinson’s diseases. But this research sampled it in “globular colonies” called llullucha, whereas the swollen mats in Ireland offer only ear-shaped bubbles. Even so it’s best, perhaps, to leave them on the gravel.