Climate change protests to be staged across Ireland on Friday 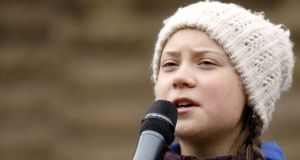 More than 21 protest events are to be staged across the country on Friday coinciding with school strikes for action on climate change, which will be attended by thousands of pupils, according to some of the organisers.

Two large protests will be held at lunchtime, coinciding with a global protest in 75 countries prompted by the school strike by Swedish teenager Greta Thunberg.

The Dublin event takes place between 1pm and 2pm outside Leinster House, while the Cork rally takes place outside Cork City Hall at the same time. At least 19 other events are being held, said Lorna Gold of Fridays For Future (FFF) Ireland.

The events are being organised via social media, while many schools and parents are helping to organise or permitting attendance at events – by allowing a set number or particular classes to attend in most cases. In addition, many schools are staging events in solidarity on their own premises. There is no indication of any schools closing for the day.

The strikes are being coordinated through two autonomous groups – FFF Ireland and School Strikes 4 Climate – as well as the Schools’ Climate Action Network (SCAN), a student-driven network of young people whose schools support their decision to strike. More than 100 schools have declared support for the action via SCAN, including some in Northern Ireland.

“The events in Dublin and Cork are school supported,” Ms Gold confirmed, “which gives people more freedom to support them.”

Taoiseach Leo Varadkar supported the action last week in the Dáil and said he was “inspired” by the strikers.

The students have singled out the Government for inaction and lack of urgency on climate change in an initial six demands issued last week.

A Facebook group set up by FFF Ireland for people organising events has more than 300 people on it, “who are mostly teachers and 90 per cent women, which is very interesting”, Ms Gold added.

Meanwhile three Irish students have been invited to the European Parliament in Strasbourg to participate in a press conference hosted by school strikers from across Europe on Tuesday.

They are Saoi O’Connor (16) of Skibbereen Community School, who has been protesting outside Cork City Hall every Friday since early January; Darragh Cotter (17) representing the environmental organisation Cork Life Centre, and Nicole Jia (15), of Mount Anville Secondary School in Dublin.

A proposal to invite Greta Thunberg, to address the parliament was vetoed earlier this month by the political groups EPP and ALDE, to which Fianna Fáil and Fine Gael belong.

The Department of Education has indicated a decision on participation or not was a matter for principals and school boards. Asti, which represents secondary teachers, said its members would adhere to decisions by the boards.

In many schools, their “Green Schools” committee has considered how best to respond to the strike and have liaised with principals and teachers on the matter.

In Coláiste Íosagáin in Booterstown, Co Dublin, its committee asked for permission to attend the school strike. The school decided to allow 5th and 6th Year students, should they so wish, to attend the protest if they have a letter of permission from parents.

In a letter to parents, the principal said the school would not be responsible for accompanying or supervising students who attend the protest. “The school feels that this event, without school or parental supervision, is not appropriate for 1st, 2nd or 3rd Year students . . . No student should feel pressurised to attend this event.”

Instead, the green schools committee “may organise a school-based event or campaign to raise the level of awareness among students about the climate crisis and address practical ways in which climate awareness can be promoted through the whole school community.

“CSPE, geography and religion teachers will facilitate discussion an give the opportunity for students to put forward their opinions as well,” she added.