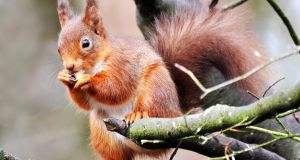 The red squirrel, although still quite widespread, has disappeared from many forests as a result of competition and disease spread by the greys. Photograph: Joe Kilroy

Everywhere, precious species are in decline. Sometimes, however, there is good news, such as the rare example of the recovery of the long-threatened Irish red squirrel.

For years, the red has faced insurmountable competition from its grey cousin, but the growth of the pine marten’s population has brought a curb to its dominance, says Dr Colin Lawton of NUI Galway.

Zoology researchers at NUIG have now teamed up with Ulster Wildlife and the Vincent Wildlife Trust to track exactly how many reds and greys exist, along with the numbers of pine martens.

The public are being asked to take part by recording any sightings they make this year. The results will then be compared with previous surveys conducted in 1997, 2007 and 2012, but the latest survey will be the most detailed yet.

Since their introduction in 1911 (a one-off introduction in Co Longford) the American grey squirrel, which is more aggressive than its red cousin, has spread throughout much of the island.

Long considered vermin, grey squirrels destroy native woodland, strip young saplings of their bark, dig up flowers and raid birds’ nests. However, they do not kill their red cousins.

Instead, they carry the deadly squirrel parapox virus, which does no harm to greys, but, if picked up by a red squirrel, will cause the infected animal to suffer an excruciating death within weeks.

Currently, the island of Ireland has approximately 140,000 reds, but there are concerns that the population in Northern Ireland could all be gone within a generation.

However, pine martens are helping to reverse the tide, since the greys are easier for the martens to catch, while the reds are smaller and more nimble and spend less time foraging for food on the ground.

“It seems the grey squirrels are not able to cope with this predator, either because they are naïve to the dangers, or are becoming stressed when the pine marten is present,” Dr Lawton.

“The native red squirrel, on the other hand, has lived alongside the pine marten for centuries, and although occasionally eaten, they can co-exist quite happily,” he said.