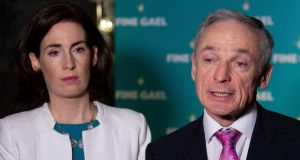 Chairwoman of the Climate Action Committee Hildegarde Naughton TD and Minister for the Environment Richard Bruton Photograph: Tom Honan for The Irish Times.

Substantial progress has been made by an Oireachtas all-party committee on agreeing major steps to decarbonise Ireland and to implement the recommendations of the Citizens’ Assembly on tackling climate change.

The Committee on Climate Action was set up for a limited term and was due to report by the end of January, but during closed-session meetings over the past month encountered difficulties in reaching a position on increasing carbon taxes.

The Irish Times understands People Before Profit and Sinn Féin are resisting any increase in carbon tax, which was strongly recommended by the Government’s Climate Change Advisory Council – it would have meant sustained increases in taxes on fossil fuels out to 2030.

Their viewpoints are likely to be contained in a minority report set to be finalised by mid March – a motion is to go before the Dáil and Seanad to extend the operational period for the special committee into next year.

Fine Gael, Fianna Fáil, Labour, the Green Party and some Independents broadly agree an approach on “carbon pricing”, which will send clear signals to consumers, businesses and industry, though a precise model is unlikely to be signed off.

Fine Gael and Green members favour a “fee-and-dividend”, whereby tax is returned to householders, while Fianna Fáil favours ringfencing all tax revenue under this heading to support reduction in fossil fuel usage.

Both the Taoiseach Leo Varadkar and Minister for Climate Action Richard Bruton have suggested homes could either be compensated through a “carbon cheque” in the post or by increased welfare payments.

In spite of the impasse, members have agreed measures including the following:

The committee, it is understood, will not recommend the CCAC be given extensive powers as had been recommended by the Citizens’ Assembly, though it is set to receive extra resources to undertake climate modelling and to continue to advising on best approaches to reducing carbon emissions.

Fianna Fáil spokesman on climate action, Timmy Dooley said he was happy with progress in recent weeks though a lot had to be finalised in coming days. “Our view has always been that monies accruing from increased carbon tax are ringfenced for climate measures, to assist people in moving away from carbon,” he added.

He believed people saw through the fee-and-dividend approach as “being too cute”, which was why his party did not favour it.

Brian Stanley of Sinn Féin said his party was prepared to look at carbon pricing options but was opposing the “plastering on of another layer of tax” without affordable alternatives for low- and middle-income households, and small and medium businesses being in place. “It’s not going to work. There are examples of failure from all over the world.”

A dividend was simply moving money around without providing people with an alternative, he said, such as enabling them to retrofit their homes; avail of micogeneration and use renewable energy.

Green Party leader Eamon Ryan said extending the period for the committee would allow it to feed into the National Energy and Climate Plan, which is due to be submitted to the EU by the end of the year – “by far the most important plan” to be signed off by the Government.

It would also allow substantial work to be completed on transport and agriculture including how a carbon tax might be applied in the latter sector as had been recommended by the assembly, as well as addressing forestry and CAP payment issues.

He reiterated his party was prepared to be flexible on carbon tax, and would accept a hybrid model, whereby there is a dividend combined with use of revenue for specific climate actions.

Committee chairwoman, Hildegarde Naughton has indicated she would support a “short, sharp consultation process” to evaluate how the tax would work and to identify challenges in different sectors.