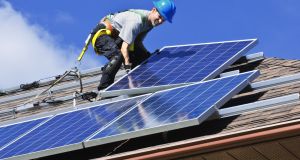 An Oireachtas committee has heard that current rules around citizens selling on renewable energy that they have generated ‘do not work’. Image: iStock/Getty Images.

Citizens and community groups want to play their part in moving away from fossil fuels and in adopting renewable energy, but regulations and grid connection issues make it impossible, an Oireachtas committee has been told.

In an address to the Oireachtas Committee on Communications, Climate Action and Environment, Ms Ruddock added: “People, however, are motivated to participate in and embrace the solutions that transition the energy system from fossil fuels to renewable energy.”

A network of more than 200 communities, with support from the Sustainable Energy Authority of Ireland (SEAI), were planning to decarbonise and to create jobs and build local resilience, Ms Ruddock said.

“But when it comes to renewable energy generation, they have been severely constrained and restricted in their efforts. Not because they are lazy, or not committed enough, but because the rules for generating energy do not work for them. They work against them. And it’s not just about selling power. The rules around grid connection, and even planning permission do not work for small generators. It’s too difficult.”

She said that preventing ordinary citizens and communities from selling renewable energy “is akin to supermarkets only paying corporate farmers and forcing small farmers to eat all their produce and give the rest away for free”.

“We see no logic for demanding that bill payers only subsidise professional developers, and why rooftop generators or community generators are different to these other actors; they should be able to benefit the same as the big guys.”

Assistant secretary at the Department of Communications, Climate Action and Environment Michael Manley said Minister Richard Bruton and the department supported the Bill, and it was not correct to say they were being “dragged kicking and screaming by Europe”.

A pilot scheme on microgeneration was in place and a new auction-based renewable energy support scheme was set to begin, but State aid approval was awaited from the European Commission.

Mr Stanley said the Bill provided an alternative for people to switch away from fossil fuels. It would mean the burden was shared in a better way and placed more of an onus on power suppliers.

He said he detected “over cautiousnesss” in the department. “It has been done before. Germany has been highlighted. Other states have done it. What we are taking about here is very very modest.”

SEAI chief Jim Gannon said the Bill would engage “energy citizens”; provide a unique role for communities and was “technology neutral”. As a consequence it could have a significant impact in reducing carbon and fossil fuel imports.

“We are near the bottom of the European league for introducing renewable power. That is going to cost the country both in fines for missing our renewable targets and in the missed opportunity from turning to our own local power supplies.”