Discharges likely to continue until upgrade of Ringsend plant is completed, agency says 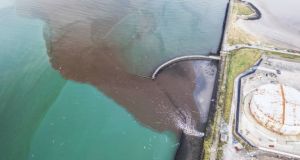 The discharge was photographed by an amateur photographer using a drone eight hours after the incident. Photograph: Eoin O’Shaughnessy

The recent discharge of wastewater sludge into Dublin Bay was mainly caused by an overload at the waste water treatment plant in Ringsend, rather than a mechanical or tank failure, the EPA has confirmed.

Discharges into Dublin Bay from the waste water treatment plant in Ringsend were likely to continue until upgrade works at the overloaded plant are completed in 2023, it added.

The facility services 40 per cent of the national population, who are based in the greater Dublin region – the equivalent of 1.9 million people – while Irish Water plans to add capacity for 400,000 people at a cost of €400 million.

Meanwhile, separate analysis by Irish Water has concluded recent difficulties at the plant were exacerbated by construction rubble being fed into the city’s sewerage system as a result of increased building activity, and that the discharge was not normal sewage. Effluent from construction sites is allowed to be discharged into the system, but only under licence.

The utility informed the EPA on Monday, February 25th about a breakdown within a section of the plant, which occurred on the morning of Saturday, February 23rd. It resulted in the discharge into the Lower Liffey Estuary.

The section of the plant where the breakdown occurred was shut down by 10am on the Saturday and the spillage ceased, though a large discharge into the bay at the outfall point 1 kilometre away in Poolbeg continued. It was photographed by an amateur photographer using a drone some eight hours later.

The public and recreational users of Dublin Bay first became aware of the incident on Monday when The Irish Times published the photograph.

The EPA confirmed this week that the section of the plant where the breakdown occurred was still shut down and repairs were being carried out, which are expected to take a month.

“The shutdown of this section is causing a 5 to 8 per cent reduction in the treatment capacity of the already overloaded plant,” an EPA spokeswoman confirmed.

Following a site inspection on Tuesday, February 26th, EPA inspectors concluded the incident was not the main underlying cause of the brown-coloured plume, which was photographed using the drone.

Instead, the main likely causes were that the plant was “operating above its design capacity” and there were significant variations over time in the waste water load collected in Dublin’s sewers and entering the waste water treatment plant (WWTP) for treatment.

“The solids entering the WWTP have risen in recent months and were twice the typical amount around the time the plume was photographed by a drone. The WWTP is unable to treat these additional solids adequately,” they concluded.

The EPA took samples of the discharge every day from Tuesday to Friday of last week. Preliminary results of the samples show the discharge was slightly above the emission limit values in the plant’s licence for “suspended solids” and chemical oxygen demand (COD).

The inspectors also photographed and videoed the primary discharge point at Poolbeg and the effluent in the Ringsend discharge channel. They also conducted a partial drone survey of the area on the Thursday, with approval from the Civil Aviation Authority (CAA).

“However, we had to stop the drone flight early, when the CAA issued a flight restriction due to a fog forecast,” the spokeswoman added.

Water quality in the area between the North and South Bull Walls, however, was likely to be of poorer quality, she added.

The EPA took its own samples in Dublin Bay on Friday morning, March 1st. The results of that sampling are not yet available.

The EPA said it was continuing to liaise closely with Irish Water on the issue. “However, it is likely the problems with the discharge will continue at this overloaded WWTP until the upgrade works are completed, between 2020 (phase 1) and 2023 (phase 2).”