Some leading nuclear countries, including Canada and the US, have SMR projects working their way through the planning process 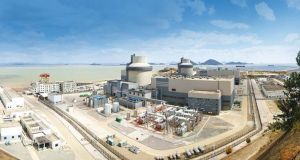 The world’s first SMR began operations in June 2018. The AP1000 was built by US manufacturing giant Westinghouse Electric Co, and is about 400km to the south of Shanghai

Ireland is struggling to reduce its greenhouse gases even while making great strides in harnessing wind power, so is there a case for looking at developing carbon-free nuclear power here, especially small nuclear reactors?

It’s a confusing picture. Ireland is a world leader in tapping its renewable wind resource, with about one quarter of our electricity now wind-generated, but it lies next to bottom of the EU table when it comes to carbon emissions.

Ireland’s energy policy is focused on developing better ways to harness clean power from renewables and biomass. Yet this approach is failing to produce enough energy to satisfy the nation’s power needs or electricity “baseload”; the daily minimum demand for power from the national grid.

The storage of energy generated from renewables is a problem engineers have yet to solve. So when the wind doesn’t blow and the sun doesn’t shine the only way to ensure baseload demand is met is to bridge the power gap by burning fossil fuels in dirty, carbon-emitting plants like Moneypoint in Co Clare (using coal), Edenderry in Co Offaly (peat) and Huntstown in Co Dublin (gas).

“While renewables are useful – especially wind in Ireland and solar in brighter countries – they cannot on their own solve the growing energy and emissions problems,” says Denis Duff, co-founder of voluntary pro-nuclear body Better Environment with Nuclear Energy.

“Small, modular reactors are possibly the most important response by the energy and science communities to humanity’s increasing difficulty in guaranteeing a supply of clean affordable energy for the planet.”

The EPAs Greenhouse Gas Emissions Projections 2017-2035 report suggests a new approach to deal with our emissions is urgently needed. The report predicts carbon emissions from agriculture, transport and the burning of fossil fuels in power plants is set to increase over the period, and that emissions reductions targets for 2020 and 2030 will not be met.

The idea of using small nuclear reactors (SMRs) to power small countries, communities or grids has been around for decades, but now some leading nuclear countries, including Canada and the US, are at the point where they have SMR projects working their way through the planning process.

These advanced SMRs are much smaller than the typical idea of a nuclear reactor plant, says Norma O’Mahony, an Irish nuclear fuel engineer working on a new-build nuclear plant with Horizon Nuclear Power in the UK.

“A lot of the nuclear plants that you are used to are on a very grand scale. They take a lot of concrete, and they take a lot of resources to manage. In cohesion with that they also have very large cores so the safety issues are greater.”

“They [SMRs] are modular, which means they can be put together in a factory and then rolled out wherever you want to build them. You can build them in a lot more places, but also save a lot on construction costs.”

Duff says one, or perhaps two SMRs, built on the site of existing fossil-fuel burning power plants, where they could link with the grid, would provide Ireland with enough carbon-free energy for its needs, and remove our reliance on imports of fossil fuels from politically unstable countries.

“We could immediately close our dirtiest power stations on a like-for-like basis. We could start with the coal and peat stations, which are the dirtiest in Ireland, and then replace the gas stations, which emit half as much as coal.”

The claims that SMRs are safer than existing nuclear reactors, that the waste they produce is not a major safety concern, and that they can produce plenty of reliable, cheap electricity is challenged by some.

“There is no evidence that SMRs as a class will be safer than larger reactors,” says Dr Edwin Lyman, a physicist and spokeswoman for the Washington DC-based Union of Concerned Scientists.

“SMR designers, in an attempt to cut capital and operating costs, are proposing exemptions from safety and security standards that could render SMRs even more of a threat to public health, safety and the environment than larger reactors,” Lyman says.

“Because of economies of scale, SMRs will generate more expensive electricity than larger reactors, which in turn are not competitive with many renewable sources. And reliability is something that needs to be demonstrated with actual operating experience.”

The US, Canada, UK, Russia and Argentina all have SMRs proposals working their way through the planning and approval processes. Canada has gone as far as producing a policy road-map for SMR deployment which they believe could bring clean energy to their many small remote communities.

There are about 50 SMRs at various stages of development globally, according to the International Atomic Energy Agency. Many are based on the “traditional” pressurised water reactor (PWR) technology that has been used in the majority of the world’s nuclear power plants since these type of reactors were first adopted by the US Nuclear Power Programme in 1954.

The PWR design involves pumping water under high pressure to the reactor core where it is heated by energy released from the fission, or the ripping apart, of atoms. The heated water flows to a steam generator, and from there the steam flows to turbines which then spin an electricity generator.

The US department of energy has said that it expects that an SMR developed by NuScale Power, which is based on a PWR design, should be operational by 2025. NuScale is also looking to develop SMRs in the UK, while Canada wants to develop SMRs for its remote northern communities.

TerraPower, a US nuclear reactor design company founded by Bill Gates and linked with the China National Nuclear Corporation, is developing a travelling water reactor type of SMR. This is at concept stage, but could theoretically run for decades without refuelling or removing its waste.

Things are moving even faster in China, where the world’s first SMR, which is also a PWR, began operations in June 2018. The AP1000 was built by US manufacturing giant Westinghouse Electric Co, and is located at the Sanmen Nuclear Power Station, about 400km to the south of Shanghai.

Westinghouse claims that its AP1000 is based on lessons learned in the design of earlier Westinghouse PWRs. This model requires far less land than was required by its previous PWRs, according to Westinghouse, as well as one fifth the amount of concrete and reinforced steel to build it.

The used nuclear fuel products from the AP100 are stored in water on-site, the company state, while old fuel waste is stored above ground in steel containers – the same method use in many existing nuclear power plants.

The Government has said it will publish a climate plan by the end of March, but nuclear power will not feature in the plan. “Nuclear power generation in Ireland is currently prohibited by legislation,” the Department of Communications, Climate Action and Environment confirmed.

Duff says given the political and legal obstacles it would be many years before an SMR could be built here even if these hurdles were overcome.

“It would take around 10 years to set up the infrastructure required before we could build and operate our first nuclear power station. The SMRs themselves will take three to four years to build. While this will not help us meet our 2020 or 2030 emissions reduction targets, they will be necessary if we are to have any realistic change of meeting our targets for 2040 and 2050.”