Neighs have it: horses facing into final Brexit furlong at Cheltenham 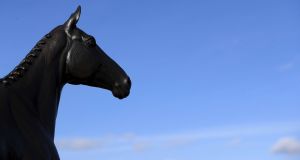 The statue of Arkle overlooks the parade ring ahead of the 2019 Cheltenham Festival: “The potential [Brexit] delays at ports and all the paperwork are going to have a massive knock-on effect.” Photograph: Simon Cooper/PA

Even the Aer Lingus staff bringing punters to the Cheltenham Festival, the most anticipated jump racing festival of the year, were thinking only one thing.

“Any tips are greatly appreciated,” said a crew member during her on-board announcement.

Ahead of take-off at Dublin Airport, the going was heavy at thronged departure gates.

“This is like Christmas Eve,” said one punter, sipping a coffee. “Cheltenham is Christmas for adults.”

Jockey Barry Geraghty led the Irish exodus to the English Cotswolds, a day before he dares to dream for a third successive victory for his ride Buveur D’Air in the opening day’s Champion Hurdle on Tuesday.

“Cheltenham is pretty much on your mind. You’d be switched on,” he told The Irish Times when asked if his nerves were at him ahead of the big race.

The possibility of the UK crashing out of the EU without a deal and the implications for horseracing were on the minds of others with just 18 days to Brexit.

“You only appreciate what you have when it comes under threat,” said Brian Kavanagh, chief executive of Horse Racing Ireland, concerned at how Brexit might pan out.

Coinciding with crucial political votes at Westminster on the UK’s departure, this year’s festival would showcase the “seamless” movement of horses, jockeys and punters between Ireland and Britain, and “how good a system we have operated and what we must aspire to in the future”, said Kavanagh.

The Irish and British racing and breeding industries are effectively borderless due to a tripartite agreement (including the French) that means horses avoid veterinary inspections and health checks as they transit over frontiers. Irish horses account for 17,000 of the 25,000 equine movements every year between the three countries.

This agreement would fall after Brexit Day, March 29th, if there is no deal. Racing’s “real fear” was a crash-out, which would “seriously accelerate” the need for new arrangements, said Kavanagh.

Geraghty said he travels over and back to the UK to race every week but a no-deal Brexit would not be so simple for the horses and could reduce the number of Irish contenders at next year’s festival.

“The potential delays at ports and all the paperwork are going to have a massive knock-on effect,” he said.

“You’ll have horses not going over if a lad is stuck at the port for four hours with a horse that doesn’t settle well in a box. The sporting owner might decide just not to go with all the trouble, the added expense and everything. It is a mess.”

The industry hopes Theresa May can nose her withdrawal deal across the finish in a House of Commons vote today.

“By the end of the week, that’s probably the biggest winner we are hoping for,” Kavanagh said.

Geraghty said he would love to hear UK politicians decide on “something logical and sensible”.

Bookmaker Paddy Power predicts industry-wide bets of more than €1.1 billion during the festival and Irish punters, a third of the racegoers at Cheltenham, to wager €452 million.

Few heading to the festival were willing to gamble on Brexit. A Cheltenham-bound Scottish emigré, who only wanted to be identified by his first name Fraser, laughed at the prospect of betting again on Brexit.

“I was in London when the vote happened,” he said. “I went to bed and woke up and my Paddy Power account was empty because of the vote.”