Members of the Oireachtas Committee on Climate Action invited student activists from across Ireland to the Dáil on March 6th to explain why they are calling on a mass protest during the school day on March 15th and to outline their demands. 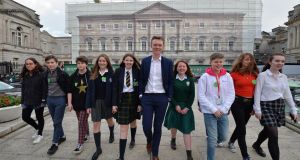 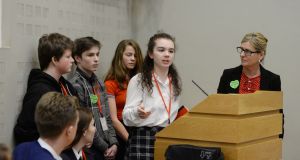 A group of secondary school students embarking on a national climate strike on March 15th have set out a series of initial demands – all of which are addressed to the Government.

The six demands were outlined at an informal meeting with politicians at Leinster House on Wednesday, which was attended by more than 20 Senators and TDS.

The students are seeking immediate adoption of the Citizens’ Assembly recommendations, and an end to fossil fuel extraction in Ireland and more ambitious targets on renewable energy than already in place.

They also call on the Government to communicate the severity of the ecological crisis due to global warming to the general public, and are critical of a lack of urgency.

Latest indications are that more 90 schools from across 20 counties, including some primary schools, will be supporting the protest, which in some cases is being supported by teachers and parents.

The meeting at Dáil Éireann was convened by Oireachtas Climate Action Committee member Senator Máire Devine of Sinn Féin, who said she had asked students from a representative mix of schools around the country to Kildare Street to explain what their strike was about and to give an indication of their demands.

She told them they were part of a global movement of young people “administering a meaningful kick in the ass to politicians”.

Two groups of students respectively planning the #SchoolsStrike4Climate in #cork and #dublin on March 15th! Students across #ireland you can join the movement by striking in front of your own school too! #ClimateBreakdown #savetheplanet pic.twitter.com/57bZVEPAIi

Following a series of face-to-face meetings with fellow students and consultation with a wider group through social media using @pullthebrakes Twitter account, the students indicated their top six demands were:

1. The Government ensures all fossil fuels are left in the ground and that Ireland uses 100 per cent renewable electricity by 2030.

2. The Government declares a climate emergency and prioritise the protection of life on Earth, taking active steps to achieve climate justice. The Government should always protect the wellbeing of the planet when making decisions.

3. The Government should not allow any new fossil fuel infrastructure to be built.

6. The Government communicates the severity of the ecological crisis to the general public and publishes regular reports of their progress.

Their demands were very clear, said Cian Farrell of CETSS, and it was expected they would be added to as other schools joined the protest. “Every single student in this room is tired of parliament not having done enough,” he told the politicians.

Saoi O’Connor (16) from west Cork, who has been protesting outside Cork City Hall every Friday for the past two months, said: “We need you to know, if you don’t act now, you will be complicit. We don’t want a pat on the head. We want change.”

Kate Minnock, a teacher at NWETSS, said that while it was difficult to quantify numbers likely to take part, “they are growing every day. We are into the thousands, especially as the Taoiseach in the Dáil has supported the action,” she said – protests inspired by the actions of Swedish teenager Greta Thunberg are due to take place in 59 countries.

The students’ action has been strongly endorsed by climate justice campaigner Mary Robinson, who is chair of The Elders, a group of independent global leaders working together for peace, justice and human rights.

In a video message, the former president commended the young people mobilising for climate action. “You have the courage and the insight to know that you’re are not being protected and that those with responsibility need to take urgent climate action,” she added.