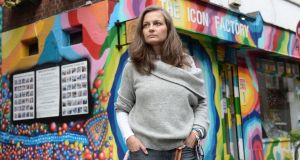 Plans for a new Chinese restaurant in Temple Bar have been refused by Dublin City Council on the grounds it would displace artists from the city’s “cultural quarter”.

An application was made by building owner Yong Feng Gao to convert The Icon Factory at Aston Place and two adjoining premises stretching to Aston Quay into a restaurant.

The Icon Factory has operated as a not-for-profit artists’ co-operative and gallery for 10 years, providing studio space to new and emerging artists. The gallery also established the Icon Walk, a public art installation by local artists in the streets around Temple Bar.

Representatives of the developer said the Chinese restaurant and associated retail space would provide a cultural use in “its own right” and it was “unfair and inappropriate” the council had allowed the unauthorised public art murals associated with the existing cultural use.

However, the council said there was an “overconcentration” of restaurants in Temple Bar, the development would result in the loss of an existing cultural use and “would detrimentally impact on the dynamic cultural mix of uses within the area”.

Artist Aga Szot, creative director of the Icon Walk said the gallery and the street artworks had brought life to unused back streets in Temple Bar.

“We want to share our concern about what is happening to Temple Bar, about the removal of artists from the city centre. No one is coming to Temple Bar now, because it was only a machine run for tourists. Art will bring people back into the city.” She said she was “incredibly happy” with the council’s decision.

The Icon Walk, which features images of Irish musicians, sporting heroes and writers, was in 2012 endorsed by the Unesco City of Literature office as an important site for the celebration of Irish literary talent and culture.

Hughes planning consultants, for the applicant, had argued the council was favouring an existing cultural use, that was not in compliance with planning regulations, over a new cultural use.

“Planning permission was never sought for the existing mural and as such this work is unauthorised,” they said. “It is both unfair and inappropriate that the planning authority is supporting and existing use which engages in unauthorised development.”

The restaurant would “further the development of Temple Bar as an exciting area of cultural activity”, they said.

However, the council said: “The proposed change of use to a restaurant and the loss of an existing cultural use would set an undesirable precedent for similar-type development.”