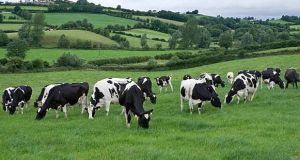 Cattle graze in Cootehill Co Cavan. Environmental umbrella group EP said ‘without a decrease in cattle numbers Ireland will continue to be in breach of EU law’. Photograph: Getty

A plan that tries to set out how Irish agriculture could achieve carbon neutrality by 2050 “perpetuates business-as-usual practices that will continue to wreak havoc on our environment and prevent Ireland from meeting it climate targets”, according to the Environment Pillar.

The Ag Climatise roadmap, published this week by the Department of Agriculture, recommends changes in farming that include cuts in nitrogen use and a stabilisation of methane emissions.

However, the plan has been castigated by environmental groups for failing to address Ireland’s climate obligations.

The EP, Ireland’s largest alliance of environmental groups, said the strategy needed to revised so it becomes “a transformative” policy in line with EPA recommendations”.

While the pillar welcomed some measures, including promotion of organic farming and commitments to improve national food security, it said the plan “is completely insufficient to meet the task at hand”.

“Agriculture is our largest emitting sector and is now responsible for over a third of our emissions. Its climate footprint has increased by 11 per cent over the past decade, and its emissions are projected to balloon even further due to growing cattle numbers,” it added.

“Left unchecked, the sector will seriously limit our ability to meet our binding 2030 emissions reduction targets and will jeopardise our longer term net-zero objective for 2050,” it warned.

Despite these realities the Ag Climatise roadmap called for stabilisation of methane emissions, “rather than the necessary outright reductions”.

Stabilising methane emissions is contrary to our Paris Agreement obligations, the EP noted.

The EP also said the roadmap “fails to commit to fulfilling our legally binding Water Framework Directive obligations. Over half of our waters are polluted, and agriculture is the main cause of this”.

Ireland has been in breach of its ammonia limits since 2016, and is projected to continue to do so beyond 2030, it added.

“Ammonia is a toxic gas that is a major by-product of animal-based agriculture and is one of the most deadly forms of air pollution.”

Ultimately, without a decrease in cattle numbers, Ireland will continue to be in breach of EU law, the EP said.

The Stop Climate Chaos (SCC) coalition also said the roadmap would not deliver reductions in agricultural emissions in line with Ireland’s climate targets.

“It does, however, include some welcome measures to reduce nitrogen fertilisers, develop forest and land sinks, restore native woodlands, and promote organic and horticultural production,” it said.

SCC policy co-ordinator Sadhbh O Neill added: “It is a basic metabolic fact that more cows will lead to higher emissions - there are no ‘efficiency’ measures that can successfully prevent enteric fermentation, and breeding efficiencies have not yet delivered the promised emission reductions despite being promoted by Teagasc for the past 8 years.”

SCC also noted that Dr Hannah Daly of UCC had estimated methane stabilisation was “problematic” since other greenhouse gases would have to reduce by 12 to 13 per cent annually to make up for lack of mitigation in agriculture.

Farmer organisations have accepted the thrust of the document and highlighted emissions reductions achieved in recent years, but said more supports to help agriculture to change were needed.

What farmers would have a problem with was pages and pages of new duties, regulations and costs without mentioning profit margins in what he described as “an economically broken and environmentally destructive supply-chain to the consumers”.

Mr McCormack said any plan to push through the changes suggested that did not start with recognition of the current artificially low price of food was “doomed to failure and inherently unfair”.

The Irish Forum on Natural Capital (IFNC) said Ag Climatise did not meet the urgent need for an overarching climate and biodiversity strategy.