Developer did not intend to have social housing in block when applying to council, says residents 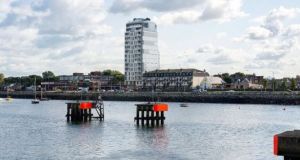 Melvin Properties wants to build a 15-storey apartment block at York Road on the south Liffey quays close to the East Link Bridge.

A proposal to build a 50m tower in Dublin’s docklands exclusively for social housing is disingenuous and “contaminates the concept of fairness”, local residents have said.

Melvin Properties wants to build a 15-storey apartment block at York Road on the south Liffey quays close to the East Link Bridge. In September Dublin City Council refused permission for the block, which it said would be “overbearing” and “visually incongruous” due to its height.

The company has appealed the council’s decision to An Bord Pleanála and said if built, all 48 apartments in the scheme would be offered to the council for use for social housing.

The council’s head of housing Brendan Kenny said the council would be interested in acquiring a lease on the building “for exclusive and long-term use” for social housing, if the planning board granted permission.

However, Ringsend residents have urged the board to refuse permission, and pointed out that the developers had intended to have no social housing in the apartment block when they made their application to the council.

Under planning rules, 10 per cent of the homes in any development of 10 or more apartments or houses must be sold to the local authority for social housing. However, there are exemptions for sites that are under 0.1 of a hectare. The York Road scheme, despite being almost 50m tall, was proposed for a 0.073 hectare site, so could remain exclusively private.

Including the social housing offer in the firm’s appeal to the board “has been set up to appear an altruistic gesture for the city,” Shay Connolly of the York Road Development Community Group said. “However, it is intended to mask the fact that the appropriate social housing provisions should have been made as part of the previous applications,” he said.

Before the 15-storey building was refused by the council, Melvin Properties had been granted permission for a seven-storey block on the same site, for which it was granted an exemption from social housing.

The company said it had “taken cognisance” of the concerns in relation to the lack of social housing and approached the council and “reached agreement in principle” for the entire block to be used for social housing.

However, Mr Connolly said doing this after the planning application had been determined by the council, excluded the community from the process.

“This revised proposal contaminates the concept of fairness and due process by denying residents, the public and the community its rights under planning legislation, undermining the principals of transparency, public participation and natural justice,” he said. “At no stage throughout the entire planning process did the applicant seek to do the right thing and provide for the appropriate mix of social housing at 10 per cent or above.”

He added there was no guarantee the block would be used for social housing if permission was granted.

Mr Kenny said any social housing agreement with the developers would be subject to negotiations on price.