What is this creature I found in a rock pool? Readers’ nature queries

Ethna Viney on a snowy owl, an otter, fossils and exotic black swans 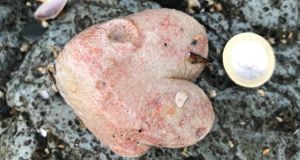 While out walking I met these three black swans on the Suir Blueway near my home. – Kathleen Ryan, Clonmel, Co Tipperary

There have been several reports of these exotic visitors to the Suir near Clonmel.

I first saw this fieldfare feeding on the crab apple tree outside my kitchen window and it’s now a daily visitor. It chases away the other fieldfares, displaying the same habits as the blackbirds and the thrushes. – Marian Carty, Drunshambo, Co Leitrim

The fossil featured on November 21st, sent by a reader in Co Clare, is a nice specimen of a colonial coral, from the carboniferous limestone. The branches of the colony are indeed like the branches of a plant. – Gillian Sheehan, Co Limerick

A friend and I were walking on Letter Hill, Tully Mountain, Co Galway, when we surprised, what we believe, was a juvenile snowy owl sheltering near the summit. It seemed to have about a 3ft wingspan, about half the size of an adult male. – Tim Redfern, Letterfrack, Co Galway

My son and I found this creature in a rock pool. Despite many years of coastal exploration, we have never come across something like this and would love to know what it is. – Edel O’Dea Kenny, Balbriggan, Co Dublin
It’s a sea sponge, probably the sulphur sponge also called the sea orange.

I was about to photograph a river Shannon scene when this guy popped up right beside me. I’m sure you’ll be able to identify it. My daughter tells me it’s an otter. – Fred Jones, Loughill, Co Limerick
Your daughter is right.

Every morning around dawn hundreds of rooks fly over our house from a woodland about two miles away, heading towards the coast. In the evening as darkness falls they head back again. Why do they do this? – Diana Duffy, Coolgreany, Co Wexford
They are moving from their roost to feeding grounds.