A national marine plan: Making the sea work for us, and us for it

Public consultation is under way on a marine plan for Ireland, and everyone agrees on one principle 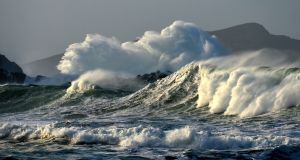 Ireland has one of the richest marine eco-systems and some of the world’s roughest seas. Photograph: Getty Images

If one picture can still paint a thousand words, a postcard printed by a State agency 20 years ago is proof of that. Some say there are no books, documentaries, opinion articles or multi-media clips that have had quite the same sustained impact as “the real map of Ireland”.

Still in circulation, the Marine Institute image delineates this island’s actual size, embracing an area 10 times that of the land, at more than 220 million acres. Compass points north, west and south of the four green fields point to at least 10 blue ones – overlaying submarine canyons and channel systems carved into the Irish Continental Margin dating back 250 million years

That area may expand to 12 times the land size and three times the size of Germany if a claim lodged by the State with the United Nations in 2009 is realised. Thanks to two decades of intensive seabed mapping – Ireland’s version of space exploration – we now know the “resource” encompasses much more than fish, and several marine special areas of conservation have been designated to protect fragile areas, such as gardens of cold-water coral formed over thousands of years.

Ireland’s jurisdiction over one of Europe’s largest exclusive economic zones is coming into sharper focus at a time of rising pressure on oceans to provide for expanding populations. PricewaterhouseCooper’s Economy of the Sea Barometer, published last year, described Ireland as having “potential” in both fossil and renewable energies, and is among the top 15 in the world for offshore wind energy development.

Ireland’s relatively shallow shelf area might also be a target for deep-sea mining, while deep-water sponges and other fauna may have biopharmaceutical application. All this at a time of increasing knowledge on the toll taken by human impact on the sea – warmer seas, rising levels and ocean acidification.

The European Commission, architect of the highly-flawed Common Fisheries Policy, is providing some leadership now, through several new directives which may, at a glance, seem at odds with each other.

The Marine Strategy Framework directive imposes a duty on member states to achieve good environmental status in four regional seas by 2020, while the Marine Spatial Planning directive focuses on how best to “harness” ocean wealth without conflict.

Neither takes precedence over the other, according to the Department of Housing, Planning and Local Government, which has been charged with implementation of both. Principal officer Philip Nugent is co-author of a baseline report on marine spatial planning, which has been published in advance of a series of public consultations held over the past month.

Nugent says he has been struck so far by the motivation and passion of marine stakeholders, and the “clear consensus among all groups that without environmental sustainability, there is no resource”.

The map for the marine plan extends from the mean high-water mark to 200 nautical miles in parts, and does not quite match the “real map of Ireland” as it does not include sea areas still the subject of a claim. The baseline report is a “snapshot” of activity which aims to inform consultation on a draft, with further public consultation before a final plan in late 2020/2021.

Two economic targets have already been articulated in the State’s Harnessing Our Ocean Wealth strategy initiated in 2012 – doubling the value of our ocean wealth to 2.4 per cent of gross domestic product, and increasing the turnover of the ocean economy to exceed €6.4 billion by 2030.

Status reports published by NUI Galway’s Socio-Economic Marine Research Unit indicate Ireland’s “ocean economy” is heading in the right direction, with turnover at €5.5 billion in 2017. However, as participants at the Galway meeting pointed out, marine spatial planning must be inclusive, rather than exclusive, and recent near-shore controversies over fish farming and renewable energy testing have highlighted a dominance of sectoral lobbying over effective coastal zone management.

It is 18 years this autumn since then environment minister Noel Dempsey published a coastal zone charter for Bantry Bay in west Cork which involved painstaking work to secure consensus on a stakeholders’ charter. The initiative was never followed through by the State, and in the intervening years there have been bitter disputes over aquaculture, location of marinas, marine aggregate extraction and management of wild salmon, to name a few.

There have also been positive developments at community level, such as the recent formation of Cuan Beo in south-east Galway, which has drawn up an environmental charter to help protect the aquatic environment.

Former Environmental Protection Agency director Micheál Ó Cinnéide points to the need for adequate resourcing to avoid mistakes made during the early stages of the Water Framework Directive. A robust planning and licensing structure for the marine which avoids current overlapping and duplication could be modelled on Marine Scotland, he believes.

Defence Forces chief Vice-Admiral Mark Mellett, an adjunct professor at University College Cork, with a PhD from NUI Galway focusing on sovereignty and sovereign rights, notes that Ireland’s sea area encompasses “one of the richest food-producing ecosystems and renewable energy environments on the planet”. It also has some of the world’s roughest sea areas – a wave of almost 30m measured off this coast in 2000 is one of largest such recorded by scientific instruments.

Mellett believes “an appropriate marine spatial planning regime should serve to “reinforce the property and sovereign rights of the citizens of the State”, but notes that “ like property rights, sovereign rights that are not upheld are more imaginary than real”.

To zone or not to zone? How do other coastal states handle marine spatial planning?

– Australia is a pioneer by necessity, managing its Great Barrier Reef through a marine park act since 1974, with eight specified zones managed by a park authority.

– Belgium manages its small North Sea area through zoning for specific activities like wind energy or aquaculture. This allows for other activities, except in nature conservation zones.

– England has prepared plans for five of 11 areas extending from 12 nautical miles out, adopting a “hybrid” approach between policy guidance and spatial designation.

– Scotland is about to review its first national marine plan, published in 2015 and managed by statutory one-stop authority Marine Scotland. It is not based on specific spatial designations or zonings, but on strategic policies and objectives.

– US: New England’s ocean plan for five states also avoids spatial designations and adopts a “principles-based” approach, based on healthy oceans and coastal ecosystems, effective decision-making, and compatibility among past, current and future ocean users.

– Ireland: submissions on the first phase of preparing a national marine plan can be made to the Department of Housing, Planning and Local Government up to midday on December 14th, 2018.