Seals and struggle: the changing fortunes of Ireland’s offshore islands 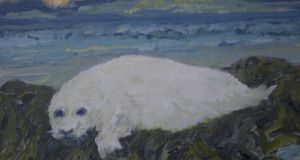 A gleam of surf at dawn, a flush of rising sunlight on new clouds from the west, awoke memories born of the season. Out beachcombing once in October, I was drawn on by a white blob at the tideline. It was a baby grey seal washed in from one of the islands – Caher, perhaps, or Frehil, where nobody goes.

Scarcely a metre long and still in its silky birth coat, it had enough energy to mount threatening little charges on its flippers, hissing like a wildcat if I leaned too closely in.

What, if anything, was expected of me? Just, perhaps, to back off and ease the white rims of fear from his eyes. As the tide reached out fingers of foam, he hauled further up the sand. It was raining. I went home, and next day he wasn’t there.

That dovetails with another little happening, this time on Duvillaun Mór, a high, humped island between Achill and the Inishkeas. Ornithologist David Cabot and I were making a wildlife film: his camera, my words.

Landing with a small rubber dinghy, we found seals at a shallow, rocky bay: a colony of females and young, with the one big hump of a bull. We set up above a creek, where a mother and her pup lay together on a narrow wedge of sand walled in by high rock.

The tide was rising, the pup still suckling. As waves surged in, it was eventually torn away and dragged back and forth in the foam, the mother curling after it. Seal pups must choose between suckling for more strength and learning to swim, but I found its struggles agonising. I begged David, foolishly, to stop filming, but he kept the button pressed until the pair were swallowed up.

Such are our changed and modern sensibilities: seals as subject of spectacle and drama, the interim exercise of pity.

Duvillaun Mór has 177 acres of rough, treeless land with one or two tiny freshwater lakes. Held to the island by rough seas, we camped between ruined gables and an ancient slab with a cross and crucifixion. Photographed in 1885, 10 residents stood along a wall, three children among them; there had once been twice as many.

The men had baggy knees to their trousers. God knows how they all lived. A new book from Diarmaid Ferriter gives the flavour of it, bitter-sweet. On the Edge (Profile Books) is his social, political, cultural and literary history of Ireland’s offshore islands from the 19th century onwards, much of it gripping and galling.

This saga survives both natural disasters and hardship and much governing indifference and neglect. His book sets it against the parallel depiction in which the islands were studied and celebrated by inquiring antiquarians, archaeologists, ethnographers, naturalists and nationalists, plus poets, painters and urban refugees. This was more than enough to weave his “textured overview of the islands; their heritage, plight, depiction and fate”. Adding in the islands’ ecology could have taken the task too far.

The book has the gathering of seabirds’ eggs and the harvesting of kelp. But grey seals were often the mainstay, hunted perilously for their valuable skins, their flesh for food, their fat to make oil for rush lamps.

On the Inishkeas, hunting took on a new dimension and the processing of whales in a venture by Norwegians brought a brief bonanza to the early 20th century. Ferriter attends to the wider history of island fishing (herring, mackerel, pollack, salmon), its misplaced piers; and demoralising, storm-swept disasters.

Today the populated islands have relinquished their traditional leaders – priests who could bully whole communities yet act as their fiercest lobbyists in battles with outside power: the book gives them a whole chapter.

Claiming rights to services and devising their own development, islanders can also resent the packaging for tourism of outworn island lifestyles and romancing of “the wild”. As holiday homes and glamping pods make playgrounds for the wealthy, and the storms and the new rains of climate change make winter even more of a trial, the western islands could, it’s feared, come to be peopled only in months when the sun shines.

Duvillaun Mór, finally evacuated exactly a century ago, does not figure in a book already rich in examples. Its wildlife – seals, storm petrels, colonies of great black-backed gulls and winter flocks of barnacle geese – is well protected by conservation orders. But in 2005, at the height of the tiger years, it was offered for sale with a £1.1 million price tag.

The vendor, a Galway cereal farmer, made a condition of concern for its wildlife. But, he argued, compared with the then €500,000 cost of a semi-detached in Dublin “you’re getting the whole thing for peanuts, relatively speaking.”

By 2014, at auction in England, its price was down to £80,000. “There is,” as kayaker David Walsh says in Oileáin, his guide to islands, “an unreliable landing place on a somewhat sheltered sandy beach (bouldery at low water)”.