Climate change protest: ‘We are scared. We are angry’

October 16th, 2018: Dozens of people take part in a demonstration outside the Dáil calling for action on climate change. Video: Kathleen Harris 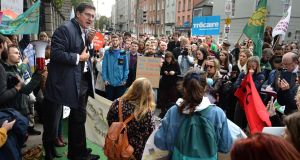 Climate change is “a challenge unlike any other” facing the world because it is happening much quicker than anticipated, a protest rally outside Leinster House was told on Tuesday.

Hannah Fitzpatrick, of Dublin Ecofeminist Collective (DEC), said the latest UN Intergovernmental Panel on Climate Change (IPCC) report had concluded it was only a matter of years before the effects of catastrophic climate change would begin to hit many parts of the world.

“Twelve years is nothing,” she added.

The rally was organised in response to the IPCC report and the Government’s failure to increase carbon tax in last week’s budget by DEC, Stop Climate Chaos (SCC) coalition, Young Friends of the Earth and the Not Here Not Anywhere group, which campaigns against fossil fuel exploration. It was attended by more than 300 people.

Áine O’Gorman of Fossil Free TCD said she was “hit hard by the IPCC report”. She was only 25 years of age, but was already sick and tired of the failure to respond adequately to the threat of climate change.

In the Irish context, she felt the rally was the beginning of something powerful. Referring to the Government, she added: “We are scared. We are angry. We are going make them change.”

Lorna Gold, a co-founder of SCC, said the rally was “a turning point in the Irish climate change movement”.

The story of a broken planet was “really hitting home” and widespread frustration with inaction shown by the Government was very evident, especially among young people, she said.

Green Party leader Eamon Ryan said a collective response led by “the Government and the political system, to make it easy for us to do the right thing” was needed rather than heaping guilt on individuals.

People Before Profit TD Bríd Smith said the IPCC report had shown a death sentence was facing large parts of the globe and was accelerating towards reality because of the “complete failure of governments and corporations to tackle climate change”.

Lord Mayor of Dublin Cllr Niall Ring said he was disturbed by the lack action by the Oireachtas and its failure to move on any of 13 specific recommendations of the Citizens’ Assembly on climate change.

Speaking later in the Seanad, Senator Grace O’Sullivan (Green Party) said the rally underlined the need for a scaling up of the response to climate change by embracing the kind of action “that was so lacking in last week’s budget”.

“Hundreds of concerned citizens are calling for action from the Government, in line with the recommendations of the Citizens’ Assembly on climate change,” she added.

One way the new Minister for Climate Action Richard Bruton could take effective short-term action was to get the Fossil Fuel Divestment Bill into the Seanad as quickly as possible, she said.

“Senators are eager to make Ireland a leader on climate action for a change, and this could be one real and quick demonstration of resolve on your part.”