Department of Agriculture on alert for myxomatosis in hares 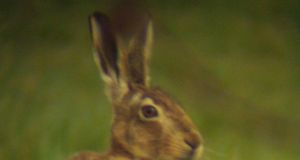 The Department of Agriculture stressed these reports “do not appear to have any immediate significance for Irish hares:.

The Department of Agriculture has said there will be increased vigilance throughout Ireland after reports of the death of large numbers of brown hares in parts of England with symptoms which suggest they were infected by the Myxomatosis virus.

If proven, it will confirm the disease has jumped the species barrier, as the virus normally only infects rabbits. Myxomatosis was introduced in Ireland and UK in the 1950s to cull rabbit populations and devastated numbers over subsequent decades.

Populations bounced back as rabbits developed some resistance but the disease, which is spread by blood-sucking insects like fleas and mosquitoes and can result in swelling, blindness and respiratory problems, is still prevalent.

The Department of Agriculture stressed on Monday, however, these reports “do not appear to have any immediate significance for Irish hares”, as they are a different species to the European brown hare which is the most prevalent in the UK.

Regional veterinary laboratories in the Republic have, nonetheless, been alerted to be vigilant if they come across diseased hares, or if dead hares are presented for post-mortem examination, a spokesman added.

Hares are much rarer than rabbits and there are currently fewer than 818,000 left in the UK, according to the People’s Trust for Endangered Species – that’s 80 per cent fewer than there were 100 years ago.

A National Parks & Wildlife Service survey in 2006-2007 confirmed the absence of brown hare from Ireland while other surveys show the number of brown hares in Northern Ireland is very low; their presence is thought to be due to recent artificial human introductions. The mountain hare and Irish hare are the only native lagomorphs (the family that includes hares and rabbits) found in Ireland.

“On present knowledge and information, the reports from the UK, by themselves, provide no basis for any concern that the detection of a disease in a different species in the UK is any specific threat to Irish hares,” he added.

“Having said that, increased vigilance is indicated and has been actioned where we are notified of sick hares or in the event that we have Irish hares presented for post mortem examination.”

The UK Department for Environment, Food & Rural Affairs has yet to confirm the hares died of myxomatosis. Another culprit could be rabbit haemorrhagic disease.

The Campaign for the Abolition of Cruel Sports said there was justification for an immediate suspension of the coursing season in Ireland as “all the evidence points to a jump of Myxomatosis from rabbits to hares”.

CACS spokesman John Fitzgerald said: “If the disease can transfer from rabbits to hares in Britain, there is no reason whatsoever to expect that the same cannot happen here in Ireland.”

The threat to the Irish hare could be exacerbated by the unnatural practices intrinsic to enclosed or “park”coursing, he said.

“The hare is a solitary creature, but in coursing up to 80 captive hares at a time are held in compounds or paddocks in the days or weeks prior to the holding of coursing fixtures. If any hare has picked up the disease and is among those captured by the net-men, the animal could quickly infect large numbers of other hares,” he added.

This aspect of coursing – the holding of hares in captivity – “represented a potentially grave threat to our hare population”, he said.