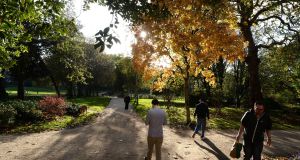 The upcoming Bank Holiday weekend will be noticeably colder than recent days as temperatures gradually drop throughout the week, Met Éireann has said.

Temperatures will drop to six degrees on Saturday with some outbreaks of showers and overnight frost.

Met Éireann meteorologist Gerry Murphy said temperatures will gradually drop between Wednesday and Thursday but it will become more marked from Friday onwards.

“Rain is going to move down over the country on Thursday night and once that clears through, there’s much colder air behind it. So on Friday there will be fairly strong north to north west wind and temperatures will be down to about eight and 11 degrees but that’s a noticeable drop into single figures for much of the country,” he told The Irish Times.

“It drops even further for Saturday between six and 10 degrees and around the same for Sunday.”

Mr Murphy said there will be a “more wintery feel to the weather” in terms of temperature and showers over the weekend.

Wednesday will be a dry day with a good deal of cloud. There will be some sunny breaks also, mainly in Munster and south Leinster. There may be a little drizzle in the north with highest temperatures between 11 and 15 degrees.

Thursday will be largely dry for most places, but increasing cloud across Ulster and Connacht will bring patchy rain and drizzle during the day.

Highest temperatures will be between 11 and 13 degrees. Rain will spread southwards from Ulster during the evening with cold notherly winds developing across the country.

Friday is set to be a cold and bright day with gusty winds. Showers will be frequent across north Ulster and Connacht and down parts of the west coast. Temperatures will drop to between zero and three degrees overnight with widespread frost.

Cold and bright weather will continue throughout the Bank Holiday weekend with daytime temperatures of seven and nine degrees. The nights will be frosty with temperatures falling to between minus two and two degrees.

Northerly winds will bring more showers on Saturday but Sunday is likely to be drier overall.