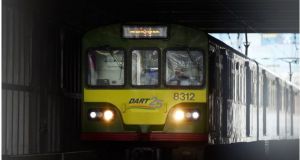 Irish Rail is beginning a major refurbishment project of Pearse Street station, which will continue over the next two years and will impact Dart services. File photograph: Bryan O’Brien

There will be significant service disruptions on the southside Dart line this weekend, due to repair works at Pearse Street station.

Irish Rail is beginning a major refurbishment project of the station’s roof, which will continue over the next two years. The station will be closed for 13 weekends over the period, including the coming October bank holiday.

On Saturday and Sunday the Dart will not be running between Connolly station and Dun Laoghaire, or between Bray and Greystones. Dublin Bus will be accepting rail tickets from customers travelling to or from southside stations.

The service disruptions will not affect the northside Dart line. The Rosslare Europort to Dublin train will be operating a bus transfer between Greystones station and the city centre.

On the bank holiday Monday, Dart services will remain suspended between Bray and Greystones, with a bus transfer in place. The service will run on a Sunday timetable across other Dart and commuter routes.

The Dublin city marathon will take place on Sunday, and Irish Rail is running extra early morning services from Drogheda, Maynooth and Howth to the city centre ahead of the race start time.

The renovation of Pearse Street station roof will cost €17 million, and is being funded by the National Transport Authority. In a statement Irish Rail said “the roof structure, which dates from the 1880s, is in poor condition, and protective mesh netting has been in place in the station below roof level in recent years to protect customers and rail services, due to the corrosion which has occurred.”

The replacement of the roof is a key safety project, according to Irish Rail.

While the roof is not a protected structure, Irish Rail has committed to maintain the external appearance and character of the existing roof.

The vast majority of refurbishment and replacement works will take place while the station is operating as normal.

The station will close for 13 weekends to allow for intensive round the clock works, which will require large cranes to install parts of the new structure, Irish Rail said.