A burying beetle, a poisonous thorn apple, and firebrats, which are relatives of silverfish 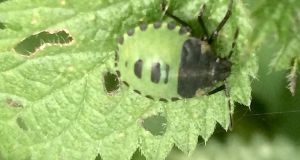 I found this little guy while picking blackberries. I wonder if he is responsible for the holes in the nettles?

It’s the nymph of the common green shield bug which feeds on the leaves of a variety of shrubs and trees.

At the end of September this bug was flying around my house. It must have come in through an open window.

It’s a sexton or burying beetle. Working in pairs, they bury small carcasses, such as those of mice or birds, by digging a hole under them. The female then lays her eggs near the buried corpse, and both adults and larvae feed on the carrion.

My son found this plant growing in a field. It’s about 1½ feet tall and the roots, like ragwort, are very hard to pull up.

Can you identify this insect and say why we have so many of them in the house. We have no access to grass, etc.

They are firebrats, relatives of silverfish. They get into houses through cracks or in cardboard boxes, old books or furniture, and they feed on cereals and paper.

I spotted these mushrooms on my father’s lawn. They have a very interesting exterior – almost as if they have been turned inside-out. Are they unusual?

It’s a shaggy ink cap, also called lawyer’s wig, and is quite common.