‘IFSC of the bioeconomy’ announced for Co Tipperary 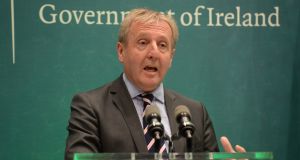 A further €5.75 million is to be spent in developing the site, according to Minister for Agriculture, Food and the Marine Michael Creed. Photograph: Dara Mac Donaill

A move to establish a major “bioeconomy” in Ireland has received a significant boost with a major new research centre in Co Tipperary announced on Thursday.

The development on the site of a former mine in Lisheen has been described as the “IFSC of the bioeconomy” in the heart of rural Ireland,

The bioeconomy is the parts of the economy that use renewable biological resources from land and sea like crops, forestry and fish to produce food, materials and energy.

The €22 million BEACON Bioeconomy Research Centre will be based at the National Bioeconomy Campus in Lisheen, while a further €5.75 million is to be spent in developing the site, according to Minister for Agriculture, Food and the Marine Michael Creed.

The facility will help develop new ideas, processes and technologies to sustainably use natural resources; to create jobs and to stimulate rural development, he said at a launch event in Lisheen on Friday.

It will concentrate on the development of products from within the dairy, horticulture, forestry, fisheries, marine biodiscovery, food waste and municipal solid biowaste sectors – as well as sustainable use of by-products from farming and food industry .

The Irish bioeconomy would also play a crucial role in helping to reduce carbon emissions and dependence on fossil resources, Mr Creed added.

“The conversion of biological resources into sustainable and circular food, feed and bio-based products presents numerous benefits and opportunities to Ireland. It means that our farmers, fishers and foresters will in the future not only be partners with food companies, but also potentially with chemical, textile and construction industries,” he added.

He described the campus, which includes a “scale-up facility” where technology can be tested and validated, as an eco-system. It was the equivalent to setting up “the IFSC of the bioeconomy” in the heart of rural Ireland, he added.

Ireland was uniquely placed to exploit the bioeconomy because it had leading global agrifood companies and world-class research. The site of more than 1,000 acres had the potential to become a very large facility, he added – already, an EU-funded project was being undertaken by Glanbia at the site

The bioeconomy already accounts for 8 per cent of the EU’s workforce, while it has been predicted that bio-based industries could create up to 1 million “green jobs” by 2030, especially in rural and coastal areas.

Minister for Climate Action and Environment Richard Bruton said: “The bioeconomy reduces emissions and our dependence on fossil resources as well as contributing to the EU target of restoring at least 15 per cent of degraded ecosystems by 2020. Ireland has remarkable potential as a location for a globally significant circular bioeconomy and will play a leading role in tackling one of the greatest global challenges we face.”

A new Irish Bioeconomy Foundation (IBF), which aims to engage industry; the farming community, Government and wider society in development of a major bioeconomy, will also be based at the campus.