Too few women at top levels in colleges, report shows

Only 21% of professors are women, with no female university head in 400 years 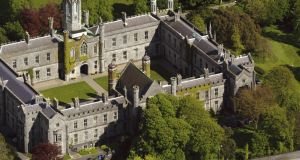 NUI Galway (above) had the lowest proportion of women at professor grade (12 per cent), while University of Limerick had the highest (31 per cent)

Women are hugely under-represented in the senior ranks of most of the State’s colleges and universities, new figures show.

While just over half of all of lecturers in the seven universities are female, these numbers fall dramatically at higher grades such as associate professor (29 per cent) and professor (21 per cent). There has never been a female president since the establishment of the first Irish university about 425 years ago.

There is a similar gender gap in the 14 publicly-funded institutes of technology, though three of these institutes are headed by women.

For the first time, third-level institutions risk funding being withheld if they fail to introduce mandatory gender quotas to increase the number of women in senior positions. In addition, they risk losing out on research funding if they do not meet diversity thresholds.

In its annual report on gender equality at third level, the Higher Education Authority notes “marginal” improvements of between 1 and 2 per cent in addressing the under-representation of women at senior levels between 2015 and 2016. While it says this is a step in the right direction, the report notes a major lack of women on key decision-making bodies in the institutions.

Among the report’s findings are that only 29 per cent of the highest-paid – defined as anyone paid more than €106,000 – core-funded, non-academic staff in the universities, and only 17 per cent in the institutes of technology, were female.

No executive management team in the university sector had at least 40 per cent of each gender, a threshold reached in just three out of 14 institutes of technology.

Among individual universities, NUI Galway had the lowest proportion of women at professor grade (12 per cent), while University of Limerick had the highest (31 per cent). Joan Donegan, incoming general secretary of the Irish Federations of University Teachers (IFUT), said progress was taking place at a “snail’s pace”, with some universities reporting no progress or even showing a deterioration.

Dr Graham Love, chief executive of the Higher Education Authority, said the “small steps in the right direction” by colleges in starting to address gender inequality among senior staff were welcome.

However, he said “strong commitment and leadership” needed to be demonstrated by the institutions if “real and meaningful progress is to be made on this important agenda”.

The report noted that while the higher education sector was at a very early stage in tackling the problem, there had been strong engagement with taking the steps required to advance gender equality.

Only colleges who are addressing gender inequality will get funding in the future from the Irish Research Council, Science Foundation Ireland and the Health Research Board.

Some universities say they have gone on to improve their records since the figures were compiled. The statistics quoted in the report, they note, are based on three-year-average data between 2014 and 2016 on the gender breakdown of professors, associate professors, senior lecturers and lecturers.