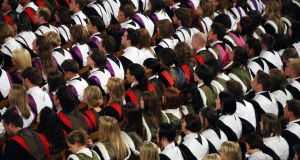 The move follows a series of controversies over the misuse of taxpayers’ money and allegations of mismanagement within the sector.

The measures are contained in proposed reforms to the funding model for higher education, drafted by the Higher Education Authority (HEA). It is due to be submitted to the Minister for Education next week.

The third level sector receives €1.5 billion in State funding each year and it is likely that individual penalties could total millions of euro.

Details of the planned funding reforms come just days after some third-level colleges were this week accused of taking a “wild west” approach to the use of taxpayers’ money by members of the Dáil’s Public Accounts Committee.

The committee published a report which was highly critical of failures in corporate governance and a lack of transparency over the way money is spent in the sector.

Proposed reforms to the funding model for third-level – which will shape the future direction, performance and impact of higher education – have been drawn up over recent months by an expert panel.

A draft of the Review of the Allocation Model for Funding Higher Education Institutions , which has circulated among senior staff in colleges in recent times, has been seen by The Irish Times.

It notes concerns about the transparency of the current funding model and its ability to ensure value-for-money.

It proposes a new model which will allow extra funding to be targeted at areas where there is a national need for skills for particular industries.

Significantly, it proposes a penalty system for “serious breaches of governance compliance”. These include :

* Failures to comply with rules over procurements and other spending;

* “Wilful breaches” of codes of governance;

Penalties, it says, should apply to clear and unambiguous breaches of these terms.

“Red line” penalties should be agreed by the end of this year with the Government and third-level institutions.

The review notes that if third level colleges are to receive extra funding, there needs to be a widespread acceptance that system is delivering “efficiently, effectively and demonstrably” against public and government expectations.

The planned reforms come at a critical time for colleges, who argue that they face a financial crisis after years of funding cuts and rising student numbers.

Student numbers are due to rise by 25 per cent within the next decade.

Minister for Education Richard Bruton increased State funding for the sector for the first time in almost a decade last year, and plans further increases over the coming years.

Against this backdrop of increased investment, he has said his department is working closely with the HEA to strengthen governance arrangements in the higher education sector.

A move to review the funding model for higher education was announced last December when appointed an expert panel.

The review is considered by policy makers to be a critical exercise that will shape the future direction of higher education.