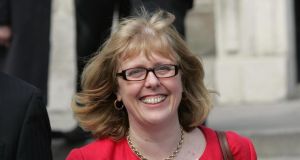 Jane Ohlmeyer, a senior academic at Trinity College Dublin, is hugely conscious of the acute lack of women in senior roles across the university sector.

“Mediocre men are outperforming outstanding women because of the nature of the system. Sometimes it’s because women are not putting themselves forward, in other cases it’s because it’s a patriarchy. However we try to gloss over that, it’s a reality.”

The professor of modern history at Trinityand director of the Trinity Long Room Hub said for the issue to be taken seriously, financial rewards and penalties are required.

“There need to be sanctions for those who don’t take it seriously. Otherwise, it won’t happen. Its very hard to change the culture on the ground. We are lagging way behind most of our European neighbours.”

A report commissioned by the Higher Education Authority last year found that a “fix the women” approach – aimed at getting women to change to fit the existing culture – would not work.

It said the fact that women were not found in the same proportion as men in the most senior positions in higher education institutions was not because women were less talented or driven enough to fill these roles.

Rather, it identified systematic barriers in the organisation and culture within institutions which mean that talent alone is not always enough to guarantee success.

Its recommendations acknowledged that achieving gender equality will require genuine, long-term commitment and investment from managers at every level.

Ohlmeyer said research funding is also a powerful way of influencing behaviour. Ohlmeyer, who is chair of the Irish Research Council, said colleges will only be able to apply for funding if they receive formal recognition of having a track record of tackling the gender gap. The same rules will apply for funding from Science Foundation Ireland and the Health Research Board.

In the meantime, she said, women in senior positions face significant barriers.

Appointing a woman to the most senior position of all - president - is something that has not happened in the 400-plus years of Irish universities. Now, she said, might be a good time to start.

“I appreciate it takes time for things to change, but we are lagging behind many other countries. There is only one other country in Europe that does not have a female university president - that is Greece. But in Ireland, things can’t change quickly enough.”