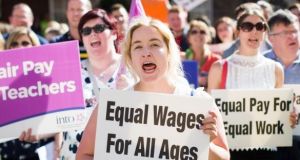 Teachers protest last May to highlight the case for equal pay, in a demonstration organised by the INTO and TUI. File photograph: Kenneth O’Halloran

The result of the ballot by the Irish National Teachers’ Organisation was 89 per cent in favour of rejecting the deal, based on a turnout of 53 per cent.

The move represents a blow for the Government, which is hoping to build support among public sector unions for the deal.

The executive of the 36,000-strong Irish National Teachers’ Organisation (INTO) had urged its members to oppose the deal on the basis that it did not progress the issue of pay equality among teachers.

Sheila Nunan, general secretary of the INTO, said the result showed clearly that the terms of the agreement were unacceptable to the vast majority of primary teachers.

“The proposed agreement does not progress the issue of pay equality imposed by Government on new entrant teachers,” Ms Nunan said.

“While progress was made in recent years on pay equality, this was not continued in the recent pay talks.

“There was an opportunity to draw a line under discrimination and right a wrong imposed on new entrant teachers. The proposed agreement does not signal an end to pay inequality.”

Teachers hired since 2011 are on a lower pay-scale than their more established colleagues.

The draft deal negotiated last month between the Government and the public service trade union movement provide for pay increases of between 6.2 per cent and 7.4 per cent for most public sector workers over three years.

However, it does not provide for concrete steps to narrow the pay gap. Instead, it says there will be an assessment of the overall pay equality issue over a 12-month period from next January.

The INTO’s executive argued that this did not progress the issue of pay equality between teachers recruited in recent years and those who were taken on prior to cuts introduced after 2011.

The Government will watch carefully to see whether the union agrees to be bound by the majority decision on the deal of the overall public service committee of the Irish Congress of Trade Unions (Ictu), the umbrella body for groups representing public sector workers.

The deal requires the backing of a majority of public service staff for it to come into effect.

The INTO’s executive is due to meet in August to decide whether to be bound by a majority decision of Ictu.

The Teachers’ Union of Ireland (TUI) and the Association of Secondary Teachers, Ireland (ASTI) have also urged their members to reject the proposed new deal.

However, TUI and ASTI members will not ballot on the proposals until the autumn.

Unions representing teachers have argued that, despite some measures put in place by the Government over recent years to bridge the pay gap between those appointed before and after 2011, a sizeable difference still remains.

Ms Nunan said principal teachers at primary level had been waiting more than 10 years for the payment of benchmarking to reduce inequality between primary and post-primary principals.

“The proposed agreement offers little prospect of delivery on this within the lifetime of the agreement,” said Ms Nunan.

“For the INTO, the recent talks were about pay restoration, pay equality, the protection of pensions and the payment of principals’ benchmarking. While there has been some progress, on a number of key issues for the INTO there has not been enough progress.”

Minster for Education Richard Bruton has said the cost of introducing pay equality for teachers and other education and training staff would be about €85 million.

Mr Bruton told the Dáil last week that various measures taken by the Government meant it had gone about 75 per cent of the way towards restoring pay equality for teachers appointed since 2011.

Government sources say the deal offers a “generous” starting salary of more than €37,692 for new teachers from October 2020 onwards.

One source said if pay parity was fully restored, starting salaries for new teachers would rise to €41,511 for a primary school teacher and €43,879 for a secondary teacher.

Mr Bruton has said pay reductions for post-2011 entrants to the public service were applied to all public servants and not just teachers.

“Any restoration of these measures in respect of teachers would be expected to be applied elsewhere across the public service,” he said.

Meanwhile the executive of the Irish Federation of University Teachers (IFUT) urged its members to accept the proposed new public service agreement.

The union said the proposals would be put to a ballot of IFUT membership, which was likely to conclude in the second week of September.

In another development, the Garda Representative Association has deferred a decision on whether to recommend the deal to its members.