UCC withholds some results amid allegations of cheating

College confirms it is looking into possible breach of examination procedures 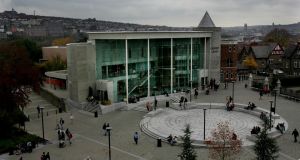 Certain students from the UCC business information systems course are alleged to have “outsourced” key aspects of a final-year project which involved computer coding, according to college sources. Photograph: Matt Kavanagh

University College Cork has withheld the results of a number of final-year degree students amid allegations of cheating and breaches of exam procedures.

Students from the business information systems course are alleged to have “outsourced” key aspects of a final-year project which involved computer coding, according to college sources.

UCC confirmed in a statement it is involved in “an ongoing process with a small number of students regarding possible breach of its examination procedures”.

It says it will not comment further on the basis the process has not yet been completed. All students at the university are required to sign a declaration that any project work they submit is wholly their own work.

Penalties for students who are found to have breached these regulations may range from receiving a mark of zero for a project to exclusion from the university.

The internal investigation is understood to have been prompted by a student at the college who initially alleged that up to 14 students may have been involved presenting other individuals’ work as their own.

This triggered an internal review involving the college’s lawyers.

It is understood that a significant number have been cleared of plagiarism, while investigations are ongoing in a “small number” of cases.

This can involve individuals or firms who provide written-to-order essays, dissertations or projects for students as part of their course work.

New laws being drafted by Minister for Education Richard Bruton will make it an offence to provide or advertise “cheating services” which aim to give students an unfair advantage over others.

There are dozens of essay-writing services available, although many insist they do not condone cheating.

The scale of cheating in Irish colleges is difficult to estimate, though there have been about 1,000 cases of students in Ireland being disciplined for plagiarism since 2010, according to figures compiled by The Irish Times last year.

The real number is likely to be significantly higher given that several universities did not provide figures.