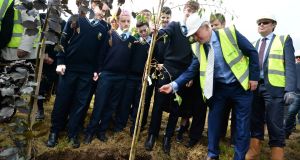 The largest single school building project in the history of the State has got under way in Maynooth, Co Kildare.

A new €30 million school campus project will deliver two post-primary schools catering for 1,000 pupils each, along with a sports hall which will be shared between the schools.

The project is being delivered on behalf of the Department of Education by the Kildare and Wicklow Education and Training Board.

One of the school buildings is replacement accommodation for Maynooth Post Primary School, which has operated under the patronage of the local Education and Training Board since the 1970s.

The second building will provide permanent accommodation for Maynooth Community College, which was established in 2014. The first students are expected to arrive January 2019.

Minister for Education Richard Bruton, who officially turned the sod on the development, said it was a “landmark development” for education.

“The two schools sharing the campus have a different ethos with one being Catholic and the other being multi-denominational,” he said.

“I commend the two schools, each with its own ethos, on their co-operation, which will continue when both schools move to their purpose built accommodation.”

He said a new patronage determination process will continue to play its role in achieving the Government’s target of a total of 400 multi- or non-denominational schools by 2030.

Mr Bruton said the Government was investing hundreds of millions every year under its school capital investment programme to provide new schools and extensions to benefit thousands of students across the country.

Sean Ashe, chief executive of the Kildare and Wicklow Education and Training Board, said the Maynooth development marked a “new era” for second-level education in Maynooth.

“I would like to give due credit to students, parents and staffs of our schools who have waited patiently for this fabulous campus to open,” he said.