Women are significantly under-represented in senior roles at colleges 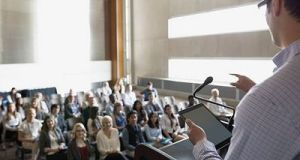 New figures released by the Higher Education Authority show that while about 50% of lecturers in Irish universities are women, only 21% of professors are women. Photograph: Getty Images

Third-level institutions face funding cuts if they fail to introduce mandatory gender quotas to increase the number of women in senior positions over the coming years.

While men and women are equally represented within universities and colleges in Ireland, women are significantly under-represented in senior roles.

New figures released by the Higher Education Authority show that while about 50 per cent of lecturers in Irish universities are women, only 21 per cent of professors are women.

Under measures agreed by the authority last year, State funding is to be linked to institutions’ performance in tackling gender inequality.

In addition, only third-level colleges which have a track record in tackling gender inequality will be eligible for research funding under new measures.

Three of Ireland’s research funding agencies – Science Foundation Ireland, the Irish Research Council and the Health Research Board – will require colleges to have gender equality accreditation by the end of 2019.

This move is aimed at promoting gender equality in research, which is also a key requirement for winning lucrative European research funding, known as Horizon 2020.

The latest Higher Education Authority gender report shows many colleges have a long way to go to bridge the gender divide.

Among the report’s finding are that only 29 per cent of the highest paid – defined as anyone earning more than €106,000 – core-funded, non-academic staff in the universities were female, and only 17 per cent in the institutes of technology.

Women were also under-represented among management teams in higher education. No executive management team in the university sector had at least 40 per cent of each gender. This threshold was reached in just three out of the 14 institutes of technology.

Among individual universities, NUI Galway had the lowest proportion of woman at professor grade (12 per cent), while University of Limerick had the highest (31 per cent).

The report noted that while the higher education sector was at a very early stage of development in tackling the problem, there had been strong engagement with taking the steps required to advance gender equality.

This includes recognition from Athena Swan, an initiative developed in the UK which combats the under-representation of women.

In a statement the authority noted that Trinity College Dublin and University of Limerick received bronze, or entry-level, awards in 2015, followed by UCC, DCU and UCD in more recent years.

Some universities say they have gone on to improve their records since the figures were compiled.

The statistics quoted in the report, they note, are based on three-year-average data between 2014 and 2016 on the gender breakdown of professors, associate professors, senior lecturers and lecturers.