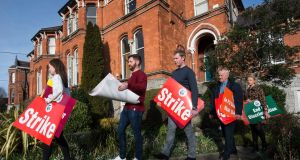 Teachers who are not part of the trade union behind Tuesday’s one-day secondary school strike will need to register their attendance at schools in order to be paid, according to Government instructions.

At least half of the country’s 700-plus secondary schools are set to shut on foot of a stoppage by the Teachers’ Union of Ireland (TUI) in protest over two-tier pay rates.

In some cases, members of the Association of Secondary Teachers’ Ireland (ASTI) and non-union teachers will have to cross picket lines in order to be paid, regardless of whether the school is open or closed to students.

In official advice to members, the ASTI has advised its members that they must be “available for work” in order to be paid.

“To refuse to do so would mean that you would be deemed to be engaging in unofficial industrial action and would not be covered by the immunities provided in Industrial Relations Act, 1990,” the advice stated.

In addition, the union told its members that the TUI had given assurances that they would have “no difficulty” with ASTI members attending for work and passing their pickets.

“This is also in keeping with normal protocols/standards set out by the Irish Congress of Trade Unions, ” the ASTI advice states.

Latest figures indicate the strike is set to close about 400 of the country’s 700-plus secondary schools. The stoppage is also expected to cause significant disruption to further education centres and institutes of technology.

The Department of Education said it was likely that virtually all of the 248 Education and Training Board schools and 96 community and comprehensive schools would be closed.

In addition, a minimum of 45 of the country’s 380 voluntary secondary schools will also shut.

While this latter category of school is mostly represented by ASTI members, the union has directed its members not to provide cover for striking TUI members.

This has forced the closure of some voluntary secondary schools on health and safety grounds, even in cases where a relatively small number of teachers are TUI members.

On foot of the strike, many schools have rescheduled the timing of “mock” exams for Junior Cert and Leaving Cert students next week, while some assessments for students sitting the Leaving Cert Applied have also been adjusted.

Talks last Friday involving the TUI and the oversight body for the public service agreement on the planned strike without any breakthrough.

However, it seems increasingly unlikely that financial penalties will be applied to the 19,000 teachers in schools, institutes of technology and centres of further education who take part in the strike on Tuesday.

In a statement on Friday, the oversight body – which is made up of representatives of public service management and unions and chaired by the Workplace Relations Commission – said it regretted that the proposed strike would go ahead .

“The oversight body will meet in the near future to consider the issues raised by the parties in connection with this matter,” it said.

The Government has powers under financial emergency legislation to impose financial sanctions on members of trade unions considered to have “repudiated” the public service agreement.

However, a spokeswoman for Minister for Public Expenditure Paschal Donohoe said it was “not constructive” to talk about financial penalties being applied to those teachers taking part in the planned strike.