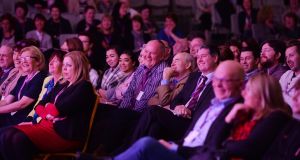 Primary school principals have called for the Irish language qualification requirement for teachers to be suspended to ease the “crisis” in teacher supply.

Under existing rules, all new primary teachers need to have a minimum of a H4 grade (60 to 69 per cent at higher level) in Irish in the Leaving Cert or an equivalent Irish diploma.

“Recruiting surplus teachers from Northern Ireland is an attractive option, particularly for our border counties, as is recruiting teachers trained in other countries whose first language is English,” it said, in a statement.

“While it is very difficult to gauge the numbers, it is likely that there is a significant number of foreign-trained teachers who are not currently teaching, as they cannot fulfil the Irish language qualification requirement.

“While the substitute scarcity continues, these teachers should, on a temporary basis and provided they have conditional Teaching Council recognition, be allowed to teach in short-term mainstream positions.”

The conference also heard of major concerns relating to special needs, including a new system for “frontloading” special needs assistant (SNA) posts from next September.

The IPPN called for a pilot project to be fully completed and for lessons learned taken into account before changes to SNA allocation are implemented in schools.

“ We were dismayed to be notified, during a recent briefing on the new guidelines, of the intention to implement the new model in all schools this September, despite the fact that the feedback from the pilot has not yet been assessed,” it said.

“We have yet to hear how appeals are to proceed where schools feel the allocation is insufficient, or where there is a significant intake of children.

“The supports promised over two and a half years ago, when the previous model was introduced, are still not in place so, again, how can we have faith that it will be different this time?”

The network also said school leaders need to know what formula is being used to frontload the SNA model.

In addition, the conference heard that the new model “vastly increases” the burden of responsibility on principals, as the allocation of resources to individual children will switch from a special education needs organiser to the principal.

There is also a “high level of anxiety” in a debate over a new total inclusion model, which would place all special needs pupils in mainstream schools .

This could see the closure of special schools and would ensure all special needs pupils – regardless of their level of ability – would be taught in their local school.

The National Council for Special Education is exploring this issue and is due to issue a recommendation on this to the Department of Education later this year.

In a statement, the network said every child should be educated in the setting that is most appropriate to their needs.

But it added: “ IPPN will not support any proposals for change until the current system is fit for purpose . . . We are extremely concerned that we are now two years on from the current model being introduced and it still hasn’t been fully resourced. How could we even contemplate any change until it has been?

“The bottom line is that children must be protected, especially our most vulnerable children, and we cannot allow for any possibility that they could be short-changed by the system.”