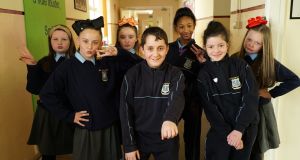 From left to right in the back is Emily Evans (11), Ali Mooney (12), Crystabele Adenuyi (11), Kayden Spooner (11) while in the front row from left is Emmie Keating (11), Giorgi Khachirashvili (11) and Denisa Baci (10) from St Audoen’s Primary School. Photograph: Enda O’Dowd/The Irish Times

Seven political party leaders squawked, harranged and interrupted their way through what passed for an election debate earlier this week.

Many were quick to label some of their behaviour as petty and childish.

So, The Irish Times wondered, how do children feel about being compared to the cast of characters seeking to run the country?

A panel of primary school pupils from St Audoen’s National School in Dublin 8, aged 10 to 12 years, was assembled to review the debate footage, and it is fair to say that, for the most part, they weren’t impressed.

“He’s saying all these promises and all, but how do we know it’s really going to happen?” said Emily Evans (11). “You feel like you could trust him – but there wasn’t that much of a change the last time, was there?”

Emmie Keating (11) has first-hand experience of the housing crisis.

“People have been on the waiting lists, and I’ve been waiting for very long, and we still haven’t got a house . . . it’s a big problem . . . instead, they’re building student accommodation,” she said.

If Fianna Fáil leader Micheál Martin was hoping this was his moment to shine, the panel had other ideas.

“I wouldn’t want him to be taoiseach. He was, like, shouting over people and never letting other people talk,” said Kayden Spooner (11). “If he’s going to lead, he’ll have to to listen to other people’s problems.”

Emmie offered some helpful career advice: “He ’d be better off as a lawyer.”

Her attack on the Government over the ballooning cost of the “most expensive hospital in the world” went down well.

“I like her,” said Giorgi Khachirashvili (11). “I would trust her. She seems to have a lot of followers judging by the applause . . . it would be nice to have a woman in charge instead of a man for a change.”

Kayden adds that gender should not matter all that much anyway: “When you are in your ma’s tummy, you’re a girl before you’re a boy . . . that’s the truth.”

Denisa Baci (10) would also be happy with McDonald as taoiseach.

“It would good to say to a woman that you can be the same as the men.”

“He has a point, we need more buses,” said Ali Mooney (12). “He mentions homelessness, housing, safety.”

“He had a nice tone,” adds Kayden. “Not too rude, he just wants his voice heard.”

When they hear it is Green Party policy to end homework at primary level, Ryan’s popularity soars even higher.

“It’s pointless spending so many hours doing it,” added Emmie.

People Before Profit’s Richard Boyd-Barrett emerged as an unofficial winner from the debate, but our panel thought otherwise.

“Just explain your point, you don’t have to make it all aggressive,” adds Emmie.

Ali, too, wasn’t impressed. “He wasn’t very positive. Instead of just complaining about it, just try to fix it,” she said

Social Democrat co-leader Róisín Shortall should be worried, too, if our panel is anything to go by.

“She looks like an old person. She has a load of knowledge, but I think we need some new minds in . . .”

“He looks like he goes out with Róisín,” said Kayden. “They’d be a good couple . . . They could go on Love Island . . . they’d be there in their bikinis and their wrinkles.”

It’s fair to say at this point that they had enough – but they were willing to share some helpful advice ahead of Thursday night’s debate.

“Don’t talk over people,” said Crystabele Adenuyi (11). “Be patient and take your turn.”

Denisa Baci (10) wanted a wider focus on issues beyond the housing crisis.

“They keep talking on the same topics . . . We need to focus on kids, play and safety and nature.”

Emily made a point which will resonate with most voters, two weeks into what feels like a very long election campaign.

“We’ve all these debates, but there’s barely any taoiseach in charge and no one’s doing anything while the debates are going on . . . so who’s going to run the country . . . When is all this over, anyway?”