ASTI secondary teachers to ballot on strike over two-tier pay 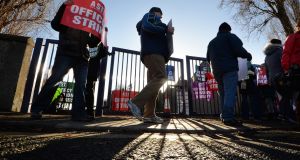 Details of the timing of an ASTI ballot on whether to strike over the two-tier pay system for teachers are likely to be determined next week. File photograph: Cyril Byrne

Second-level teachers who are members of the ASTI are to ballot for strike action over the two-tier pay system in schools.

Hundreds of schools are already expected to close on February 4th as members of the Teachers’ Union of Ireland (TUI) get set to stage a one-day strike on the same issue.

The ASTI’s central executive council decided to ballot its 17,000 members for industrial action at a meeting on Saturday in protest at the “unequal pay of teachers who entered the profession since 2010”.

Details of the timing of the ASTI ballot are likely to be determined next week.

However, if the union secures a mandate for industrial action, this is expected to take place only as part of co-ordinated campaign with at least one other education union.

The ASTI will not be taking part in the strike planned by the TUI for February 4th as it will not have concluded a ballot in time. Any action undertaken by ASTI members will take place at a later date.

The ASTI said on Saturday that it had taken industrial action, including strike action, over unequal pay in 2016.

It said that since then there had been some improvements to the pay of new entrants to teaching.

“However, despite ongoing campaigning by the ASTI and the other teacher unions, unequal pay remains,” the union stated.

ASTI president Deirdre Mac Donald said: “It is unthinkable that in 2020 some teachers have inferior pay arrangements even though they are doing the same work as their colleagues in the next classroom. In taking industrial action in 2016, ASTI members lost pay and were further penalised under FEMPI ( financial emergency) legislation, and are still suffering the consequences. However, their action put unequal pay firmly on the agenda. In addition, the ASTI’s actions led to some gains for lower-paid teachers, but full pay equality remains to be achieved and we intend to achieve it.”

At its meeting on Saturday, the ASTI central executive passed a motion which stated: “That the ASTI ballot for industrial action up to and including strike action for equal pay, to be taken in conjunction with one or both of the other teacher unions.”

In recent days, the ASTI issued instructions to members including principals and deputies not to provide cover for their striking colleagues during the forthcoming stoppage by TUI members on February 4th.

The ASTI told members that they should turn up for work as normal on February 4th on the basis that if they refused to work on the day, they would be deemed to be engaging in unofficial industrial action. The union says ASTI members would be paid even if their school was closed as a result of the TUI strike.

Crucially, the union guidance states that “no member of ASTI, including principal teachers, deputy principal teachers and/or other post holders may undertake any duties that are normally done by colleagues who are members of TUI”.

The union’s instruction to members also stated: “No ASTI member can undertake the supervision/substitution duties of an absent TUI colleague on 4th February who will be engaged in industrial action. Redesign of the roster with a view to having ASTI members cover supervision slots normally undertaken by TUI colleagues is not acceptable.”

The move means that most secondary schools will shut on health and safety grounds, even if only a small number of teachers are TUI members.